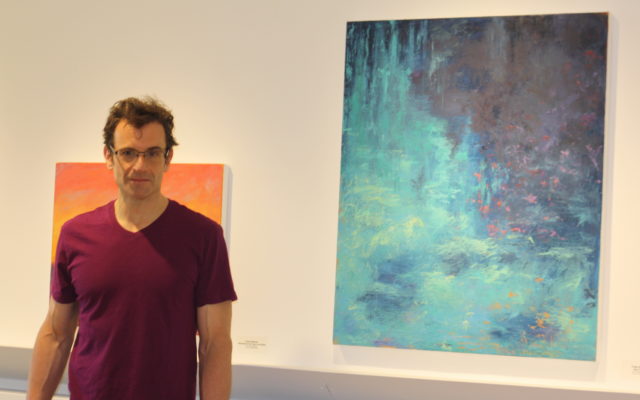 Melissa Lizotte • June 15, 2019
Sullivan has been an artist throughout his life, but it was not until moving to Aroostook County in 2006 that he found a path that allowed him to embrace his true creative self.

PRESQUE ISLE, Maine — Frank Sullivan, an artist based in Littleton, has opened a new exhibition at the University of Maine at Presque Isle’s Reed Fine Art Gallery that he hopes inspires viewers to form their own responses to the paintings and drawings and the Aroostook County landscapes that influenced them.

Sullivan has been an artist throughout his life, but it was not until moving to Aroostook County in 2006 that he found a path that allowed him to embrace his true creative self.

He grew up in Massachusetts and was working there as a graphic designer and illustrator when he realized that the fast-paced, corporate world he produced art for did not satisfy him personally.

“I was teaching myself to paint in my spare time. It became very consuming. I would go out for my lunch break, start painting and forget to come back to work,” Sullivan said. “I would stay up late to paint and it became apparent that that type of art was what I should be doing.”

For a long time, Sullivan and his wife Meryl were unhappy with the energetic, hurried nature of urban life and knew their dream was to move to an old farmhouse in either Vermont or Maine. They later found their current home — a Littleton farmhouse — online and knew once they saw the property that Aroostook County was the ideal place to raise their family.

Though the family was taking a risk by moving to a state with which they were unfamiliar, Sullivan knew that they should follow their instincts.

“I had been doing this goal-setting exercise and a part of the exercise was to answer questions immediately without giving them any thought. Two of the questions were ‘What would you do if you found out you had only a year to live?’ and ‘What would you do if you had a million dollars?’” Sullivan said. “Both my answers were the same: move to Maine, buy an old farmhouse and paint.”

The decision proved to be the best one that Sullivan made for his artwork.

After moving to Littleton he converted a former barn into a studio and small gallery space, where he now creates oil paintings and pastel drawings and teaches art workshops. He is an adjunct art instructor at UMPI, where he teaches drawing courses, and previously taught art appreciation and drawing at Northern Maine Community College. 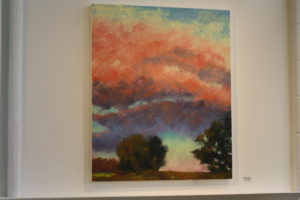 “The Perfect Moment” is one of numerous landscape paintings that Frank Sullivan says was inspired by the vast nature of Aroostook County. Melissa Lizotte/The Star-Herald

During the past 13 years, Sullivan has gained most of his artistic inspiration from the nature surrounding his home. Several of the 43 oil paintings and pastel drawings included in his UMPI exhibition were inspired by the same former potato field that he sees while looking out his kitchen window or walking to his studio.

“I’ve seen this field in all types of weather at all times of day. Nature is a starting point, but what I create always ends up unique,” Sullivan said. “The landscape up here reminds me of my childhood. Where my parents live — in Marlborough, Massachusetts — used to be surrounded by woods.”

These days, Sullivan enjoys wandering outside, often letting the slow, quiet nature of the region inspire him when he least expects it. He said that much of his paintings and drawings reflect on the conflict between order and chaos in nature as well as between planning for the future vs. what cannot be controlled.

Sullivan has named his UMPI exhibition “All The Things I Couldn’t Say” to reflect how art is a “visual language” that allows him to communicate with viewers in a style that written language cannot achieve. Although most of the pieces have titles, he prefers to not reveal their origin and let viewers decide what the artwork means to them.

“I hope people learn a little bit about me through the exhibition, but also learn something about themselves based on how they react to the art,” Sullivan said. “As an artist, it’s important to make every element of a piece get across what you’re trying to say, but everyone has a unique response.”

“All The Things I Couldn’t Say” is on display until Aug. 2 in the Reed Fine Art Gallery, located on the second floor of UMPI’s Center for Innovative Learning. The gallery’s summer hours are 8 a.m.-4:30 p.m. Monday through Friday.

Maine is more than eight months into Medicaid expansion under the federal Affordable Care Act and trends around who is enrolling and where they live are starting to emerge, bucking some expectations and pointing out access challenges.
Pets END_OF_DOCUMENT_TOKEN_TO_BE_REPLACED