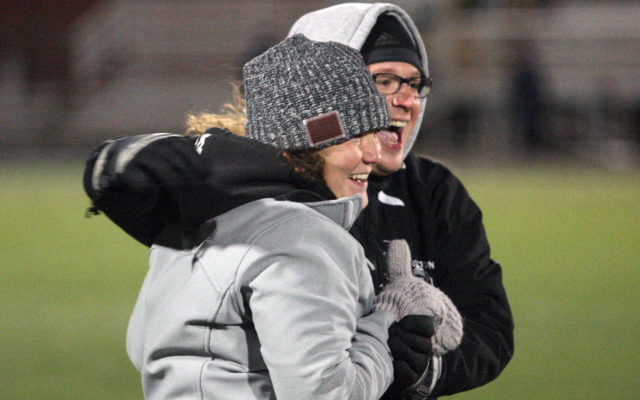 Joseph Cyr • June 24, 2019
Houlton has turned to one of its own to fill the varsity girls soccer coaching vacancy created when long-time coach Tim Tweedie stepped down in May.

HOULTON, Maine — Houlton has turned to one of its own to fill the varsity girls soccer coaching vacancy created when long-time coach Tim Tweedie stepped down in May.

Marina Cameron, a 2013 graduate of Houlton Middle-High School and former player for coach Tweedie, has been named the new varsity girls soccer coach.

“Marina has all the tools needed to be successful as a coach,” Tweedie said. “She’s intelligent, hard working and enjoys working with young people. Her experience as a player and assistant coach will serve her well in this new capacity.”

Cameron served as the junior varsity and assistant varsity coach for the Shires last fall. Prior to that, she gained experience as a middle school soccer coach in southern Maine. She also returned to Houlton each summer while attending college at St. Joseph’s College to assist with the summer soccer programs for the high school and to work at the Houlton Recreation Department.

“Having played for coach Tweedie and helping him the past few years, my approach will be similar to his,” Cameron said. “I have some big shoes to fill, but I am very excited for this opportunity and am looking forward to the season. Thankfully, having been the assistant coach last season I was able to see the girls play and can build upon last season.”

Cameron said her main focus will be to push players to reach their fullest potential both on and off the field.

“Developing soccer skills is obviously important for players, but as a coach you must also teach them skills such as discipline, patience, determination, and teamwork in order to have a successful team,” she said.

Cameron, who was recently hired by RSU 29 as a fifth-grade teacher at Houlton Southside School, said her former coach has been extremely helpful with the transition to becoming a varsity coach.

“Coach Tweedie has always been so supportive on the field and off, from high school, to college, and continued today,” she said. “We have talked a little bit about new and returning players, what to expect this season, and I know as the regular season nears we will sit down and discuss things further. He has been so helpful at providing coaching contacts in order to set up summer scrimmage opportunities and giving me gear that he had to prepare for the summer season. I am so thankful to have the opportunity to work with Mr. Tweedie to learn drills, tips, and I know that he will continue to be a valuable asset when called upon for help.”

One of her fondest memories of playing for coach Tweedie was traveling to the Mt. Abram soccer tournament, where the team camped for a couple of days and played many games against a variety of opponents that Houlton does not normally see.

“The environment was so fun. When we weren’t playing we were hanging out as a team playing games, and it was a great team bonding experience,” she said.

A three-sport athlete at Houlton (basketball, soccer, softball), Cameron said basketball used to be her favorite sport, but it was coach Tweedie who inspired her to become a better soccer player. She went on to play soccer in college.

“One aspect of soccer I find enjoyable is the competitive nature of the game,” she said. “Competition teaches us to take risks. We can develop our confidence to do things that no one thought possible and perform at a higher level.  Soccer is also great because the players get to control so much of the game. Soccer is not scripted with play after play determined by the coach. The players get to make choices, and become leaders.”

Halfway Home Pet Rescue in Caribou has partnered with the Houlton Humane Society shelter for a cat spay and neuter clinic on Saturday, May 30, and Sunday, May 31, in Houlton.
Campaign Corner END_OF_DOCUMENT_TOKEN_TO_BE_REPLACED