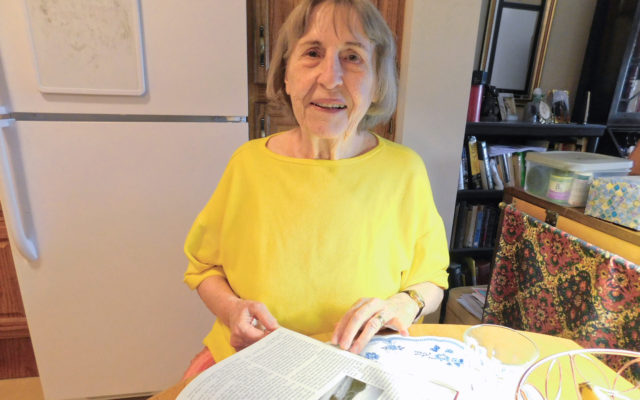 Nina Mahaleris • June 26, 2019
Marilyn Chase is a well-accomplished author, journalist and educator -- although she’s unlikely to laud her own success. She’ll celebrate her 90th birthday this October.

Marilyn Chase is a well-accomplished author, journalist and educator — although she’s unlikely to laud her own success. She’ll celebrate her 90th birthday this October.

Although long retired, Marilyn still takes advantages of life’s simple pleasures. She’s an avid reader and gifted writer, participating in a writing program for seniors at the Leisure Gardens and Village Retirement Center.

She even had one of her essays published in a collection of short stories about Fort Fairfield.

And most impressively, she’s legally blind.

Chase has macular degeneration, a condition that develops from damage to part of the retina. Over time, the disease can cause partial or full blindness. Macular degeneration is considered an incurable eye disease. She doesn’t let it slow her down, though. Chase continues to read with the help of her husband, Philip, and she still writes.

In 2008, her essay “A Farewell to the Farm,” was published by the Fort Fairfield Sesquicentennial Committee. The book is a large collection of stories written by people from Fort Fairfield between 1858 and 2008, which she keeps at her home to share with visitors.

The inspiration for the essay came from memories of her youth growing up on a Fort Fairfield farm that had been in their family since 1840.

Chase was born in 1929 right before the start of the Great Depression. A relative visited her mother in the hospital after the birth and said, “It’s a hell of a time to have a baby.” The very next day, the stock market crashed.

The farm was not immune to the economic downturn plaguing the rest of the nation in the 1930s. Nonetheless, it survived through the Depression and remained in the family until it was sold to an outside buyer many years later.

Chase wrote “A Farewell to the Farm” the summer prior to her father’s death. The story described the loss of selling the farm where she was raised which had been in the family for generations. “I love to write tearjerkers,” she said. Growing up, she could tell she had a good story if it made her sister cry while reading it.

From a young age, Chase knew she wanted to pursue a career in writing. When her sixth-grade teacher asked the students what they wanted to be when they grew up, she said with confidence, “I want to be a journalist.”

In 1951, Chase graduated from the University of Maine with a degree in theater and journalism. After college, she worked for Bangor Evening Commercial writing feature stories and helping with the evening news. At the time, the weekly wage for such work was between $25 and $30.

She married for the first time at 19 and moved to Fort Smith, Arkansas, with her husband who was enlisted in the U.S. Navy. She got a job as a reporter for the Arkansas Times Record.

Upon returning to Maine, her husband began working for the Maine Line Magazine. Chase said he was a gifted photographer whose work won a couple of prizes from the Associated Press. But the demands of his job often left Chase by herself at home with four kids to raise.

All of that changed when she met Philip. After her divorce, she took a position at Houlton High School teaching English literature. Philip was a teacher at the same school and they soon became close friends. By 1970, they were married. “Philip rescued me,” she said.

For a short time, the family lived downstate, where Chase worked at the Maine Sunday Telegram. But when they returned to Aroostook County, they stayed for good.

They reside together in a cozy apartment at Leisure Village. Their space is conveniently close to the library and Philip’s piano-playing can be heard from down the hall. Marilyn listens to books on tape. She’s happy with life the way it is, she said.

When asked if she wants to live to be 100 years old, Marilyn appeared pleased at the thought. “Yeah that’d be fun,” she replied. “As long as I have my mind.”

Well, normally this time of year we would be gearing up for our annual “Paws for the Cause” walk.  Families and their furry companions would be showing up with generous pledges in hand, ready to enjoy an easy two-mile walk and then some welcomed refreshments afterward.
Campaign Corner END_OF_DOCUMENT_TOKEN_TO_BE_REPLACED