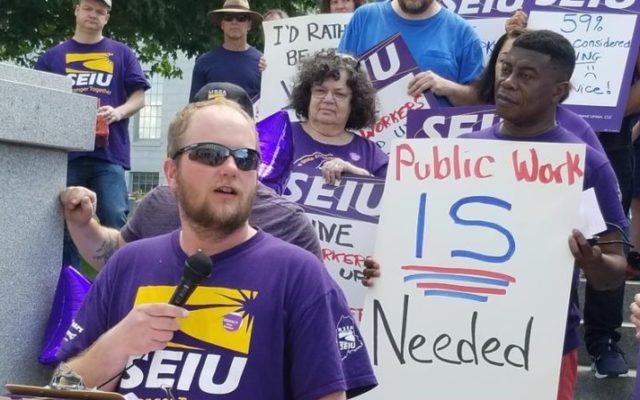 Michael Shepherd • June 26, 2019
A top official with Maine’s major state employees’ union said it reached a “tentative agreement” late Tuesday with the administration of Gov. Janet Mills on a new two-year contract that came less than five days before the scheduled end of their current contract.

Want to get the Daily Brief by email? Sign up here.

A top official with Maine’s major state employees’ union said it reached a “tentative agreement” late Tuesday with the administration of Gov. Janet Mills on a new two-year contract that came less than five days before the scheduled end of their current contract.

The Maine State Employees Association didn’t disclose the terms on Wednesday because they hadn’t been sent to members. Members will vote to ratify the contract over the next month after a relatively public dispute with the Democratic governor’s administration in the past week.

We don’t know what’s in the agreement, but it came quickly and the union has asked for pay and cost-of-living increases, retention initiatives and a higher wage floor. Both the Mills administration and the union, which represents more than 9,000 workers, haven’t discussed the terms of the confidential negotiations, which is typical in these situations. We may learn more about the agreement later today.

But Alec Maybarduk, the executive director of the Maine State Employees Association, said a tentative agreement was reached late Tuesday with the state making “progress” on many of the issues that the union has raised publicly about negotiations during the past few months.

The union has been reasonably open about those top-tier issues. It wanted across-the-board pay increases, efforts to retain workers and a $15 wage floor across state government. Union leaders tried to persuade the Legislature to study a compensation system that hasn’t changed substantially in 40 years, though that bill was punted to 2020.

This agreement happened quickly. State workers held a Saturday rally and protested outside the Blaine House. Before that on Friday, Maybarduk said the sides were “very far apart” on the union’s key issues. On Tuesday, Mills spokeswoman Lindsay Crete said the governor is committed to providing competitive wages and benefits and making sure “employees are treated well,” but the work will “take time.”

It comes after a difficult time for the union and a session of the Democratic-led Legislature where Mills stymied some goals of organized labor. This contract has to be viewed in the context of the state workforce under the administration of former Republican Gov. Paul LePage, who shrank the ranks of state employees by 1,600 over his eight-year tenure. During that time, unions representing employees have complained of understaffing.

The union itself was hurt in 2017 after members ratified an agreement with the LePage administration that traded higher than originally offered pay raises for the elimination of the requirement that all represented workers pay fees to the union even if they weren’t members.

The union itself was hurt in 2017 after members ratified an agreement with the LePage administration that traded higher than originally offered pay raises for the elimination of the requirement that all represented workers pay fees to the union even if they weren’t members.

Labor advocates had their legislative victories in 2019, including on a bill that allowed loggers to collectively bargain. They were somewhat burned by her consensus deals on a paid leave law and workers’ compensation reform, the latter of which Mills has promised Republicans she won’t touch again during her tenure.

She also issued last-minute vetoes of bills to establish binding arbitration for public employees in labor impasses and allowed teachers to bargain over planning time. It’s not abnormal for labor to war with a governor, even when they’re a Democrat. To a point, it’s an inherently adversarial relationship that will be worth watching as Mills continues.

— A Maine woman will serve 50 years in prison for killing a 4-year-old who was in her care. On Tuesday, Superior Court Justice William Stokes handed down the sentence to Shawna Gatto, who in April was convicted in a bench trial for the murder of Kendall Chick, her fiance’s granddaughter, in their Wiscasset home. Stephen Hood, the child’s grandfather, will not be charged, according to prosecutors. A few hours after the sentencing, the Department of Health and Human Services released its assessmentthat faulted how caseworkers handled Chick’s case.

— The state’s public advocate wants further review of Central Maine Power’s billing practices. On Monday, the Office of the Public Advocate asked the Maine Public Utilities Commission to review customer accounts with high bills from a period after an outside consultant completed its audit of the billing system. An audit last December by Liberty Consulting Group of Pennsylvania blamed the high bills on weather and not CMP’s billing system, but the high bills persisted, with customers continuing to complain to the utility and to the PUC. The public advocate wants to take a broader look than Liberty did, including delving into information stored on meters and how it compares to bills. The new study would examine billing that occurred after Liberty concluded its audit in April 2018 and run until the present.

— Climate change had a lot to do with the closing of a beloved Maine pub and brewery. Major flooding in January and March essentially wiped out the beer storage capacity for Three Tides & Marshall Wharf Brewing Co. in Belfast. With no way to store enough fresh beer, the place’s owners were forced to close abruptly in April. As they strive to reopen the tap room, the community grieves. “It’s like we lost our own community room, our personally shared space,” said pub patron Charlie Dufour. “Three Tides didn’t just belong to the Carlsons and their staff — it belonged to us. To say some of us are grieving that loss is not an overstatement. When you love something, including a special physical space, its sudden loss is heartbreaking.”

— The man who led the investigation into Russian interference in the 2016 election will testify to Congress.Special prosecutor Robert Mueller has agreed to testify publiclybefore Congress on July 17 after Democrats issued subpoenas to compel him to appear, the chairmen of two House committees announced. Mueller’s unusual back-to-back testimony in front of the House Judiciary and Intelligence committees is likely to be the most highly anticipated congressional hearing in years, particularly given Mueller’s resolute silence throughout his two-year investigation into Russian contacts with President Donald Trump’s campaign.

The Daily Brief is going to go on hiatus for the next few weeks so we can sneak in some vacation time and think about how to improve the newsletter and our political reporting as we approach the earnest start of the 2020 campaign and the next legislative session.

Toward that end, we’re going to soon be reaching out to many of you — our most loyal readers — to ask for your advice in how to approach that. This is not goodbye for the Daily Brief. It will be back, though we’re thinking of re-imagining it before we bring it back later this summer.

Of course, the news never stops and we will continue to cover it. With any ideas for how we can help you better understand and track Maine politics in the Daily Brief and through our coverage, email me at mshepherd@bangordailynews.com. Until we return, here’s your soundtrack.

Today’s Daily Brief was written by Michael Shepherd and Robert Long. If you’re reading this on the BDN’s website or were forwarded it, click here to receive Maine’s leading newsletter on state politics via email on weekday mornings. Click here to subscribe to the BDN.

A few years back the Ark was gifted with something that we never dreamed possible. It is a gift that left us speechless and opened a whole new door for us.
Campaign Corner END_OF_DOCUMENT_TOKEN_TO_BE_REPLACED