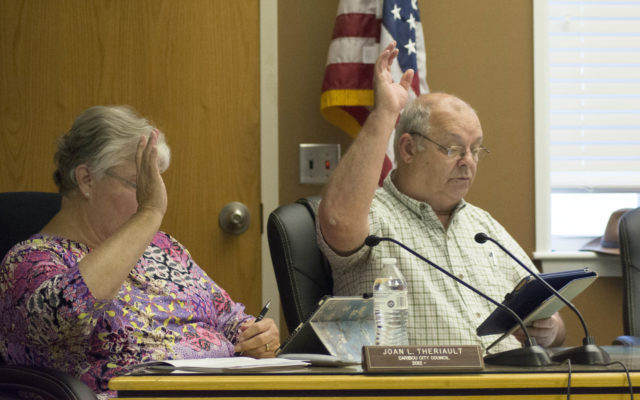 Chris Bouchard • July 1, 2019
Caribou City Councilors voted on June 24 to demolish four properties the city acquired months ago on River Road after rain and runoff damage prompted city officials to shut down a portion of the roadway last spring.

CARIBOU, Maine — Caribou City Councilors voted on June 24 to demolish four properties the city acquired months ago on River Road after rain and runoff damage prompted city officials to shut down a portion of the roadway last spring.

They agreed earlier in the meeting to demolish one of the four properties, a mobile home on 153 River Road, after City Manager Dennis Marker informed the council that, despite putting the property out to bid in an effort to generate revenue for the city, officials did not receive any bids for the trailer.

But the council was split when it came to demolishing the other properties on the road.

Among many factors for officials to consider were that the results of an additional survey from engineers Dubois & King determined that the road failed as a result of rotational landslide activities, and that an additional 30 feet of the road — essentially the entire width of the road — could slide down into the Aroostook River in the coming years as a result.

Before determining the best course of action moving forward, the firm has recommended conducting an additional 12 borings along the failed area to further analyze the problems. The firm also has indicated that plans based on these studies may not be finalized until spring of next year.

In the meantime, City Manager Dennis Marker told the council that he had met with Public Works Director Dave Ouellette, who said that all possible temporary fixes of the road until next spring would involve demolition and removal of the existing homes.

The first of the three options involves filling in the hole left by the runoff damage, which would cost approximately $4,000. Some concerns regarding this plan are that there is no guardrail in place to restrain the materials and prevent a similar situation from occurring.

The second option would be to have Caribou Public Works cut a temporary road farther away from the damaged portion. While this option is safer than the first, it would require relocating power poles and potentially waste materials as engineers may recommend a different configuration for the road once their plans are finalized. Estimated material costs for the second choice are $35,000.

The third option would be to have EMERA cut and remove power lines within the affected area of the road. Then, instead of relocating the road as option two recommends, Public Works would expand the existing road and rebuild the shoulders. This would waste less material “since the ultimate alignment” of the new road “is yet to be determined,” Marker wrote in the council packet. This option is estimated to cost $15,000.

Ouellette reiterated that with every possible option, the remaining homes are “going to be demolished regardless.”

Councilor Joan Theriault then made a motion to give Public Works permission to demolish the remaining homes on the road, but the motion ultimately failed as councilors were split with three in favor and three against.

Another motion was made to put the homes out to bid, but this also failed with three in favor and three opposed.

Mayor Mark Goughan said that while he agrees with eventually demolishing the homes, they do have some “nice doors and windows,” and since they were purchased with taxpayer money, the city should try to make as much of that money back before giving permission for demolition.

“I don’t want people to grab that microphone and say ‘Why didn’t you give me a chance to buy those windows out of that trailer?’” Goughan said. “The process is that you put city assets out to bid.”

Councilor Dave Martin asked Ouellette if he could set any valuable items aside while tearing down the homes. He said the windows are among the most valuable items on the property — worth maybe $25 apiece — and while the city would get more value out of them if a bidder were to remove the windows, he “has concerns about allowing multiple people in there with the possibility of getting hurt.”

Councilor Thomas Ayer suggested creating a waiver or legal document that would absolve the city of any liability were a bidder to get hurt while removing windows or other potentially valuable items from the property.

Theriault said that this is not likely to prevent a lawsuit.

“Having 50 years in the insurance business, no piece of paper is going to stop anyone from suing,” she said. “Whether they get anything from the lawsuit or not is another story, but there could still be a lawsuit.”

Ouellette added that there is “not a big potential for the city to make a lot of money” from putting the homes out to bid, and that there are “maybe two to three thousand dollars” worth of salvageable items on the property, which is “not worth the liability the city is going to take on.”

Ayer ultimately moved to demolish the homes and said he understood Ouellette’s point, adding that he still agrees with the mayor that the city should follow through with its policies and procedures.

With Ayer voting in favor of demolition, the motion passed 4-2.

At the Houlton Humane Society, we take adopting the cats and dogs in our charge very seriously.
Campaign Corner END_OF_DOCUMENT_TOKEN_TO_BE_REPLACED