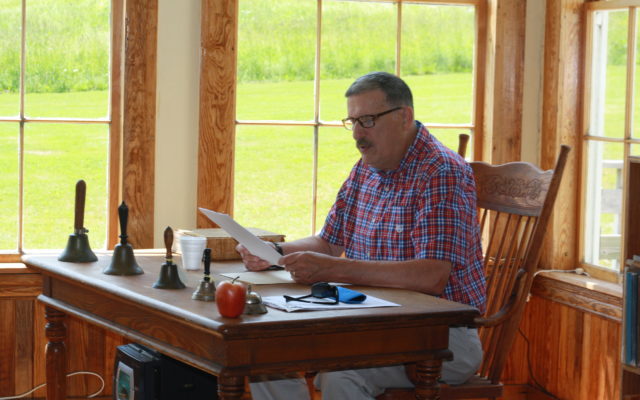 Melissa Lizotte • July 6, 2019
Approximately 30 community members sat in the wooden desks of the James School, a former one-room schoolhouse that is now preserved as a local historic landmark, on the afternoon of Thursday, July 4.

PRESQUE ISLE, Maine — Approximately 30 community members sat in the wooden desks of the James School, a former one-room schoolhouse that is now preserved as a local historic landmark, on the afternoon of Thursday, July 4.

People young and old leaned forward in their seats, anxious to hear history come to life during the annual reading of the United States’ Declaration of Independence.

“‘We hold these truths to be self-evident, that all men are created equal, that they are endowed by their Creator with certain unalienable Rights, that among these are Life, Liberty and the pursuit of Happiness,’” said Steve Summerson, deacon of St. John’s Episcopal Church, as he read from the document that 56 representatives from the 13 original U.S. colonies signed on July 4, 1776.

For more than five years the board of directors for the James School has held a reading of the Declaration of Independence on the Fourth of July to celebrate the document that helped establish the United States’ independence from Great Britain.

Summerson read the Declaration in its entirety, which included statements from the U.S. representatives that denounced the quote “tyranny” of British rule during the era in which the document was drafted.

“A Prince, whose character is thus marked by every act which may define a Tyrant, is unfit to be the ruler of a free people,’” Summerson said, reading a passage that criticized England’s King George III.

Micheal Gudreau, president of the James School board of directors, noted that hearing someone read the Declaration aloud presents the public with a unique opportunity to learn about a crucial time in U.S. history.

“The Fourth is a good day to remember why things happened the way they did and to hear those words from an actual voice,” Gudreau said.

During the event, Gudreau invited children to ring the old school bell that teachers once summoned students inside for daily lessons. Hannah Chartier, 12, of Fort Fairfield said that she enjoyed hearing the Declaration of Independence after learning about the document in school.

“It’s important because we declared our freedom from England,” Chartier said.

Gudreau said that for him the Declaration represents not only freedom but the country’s ability to come together to stand up for common values.

“If we’re united we can make so many things happen,” he said.

Well, normally this time of year we would be gearing up for our annual “Paws for the Cause” walk.  Families and their furry companions would be showing up with generous pledges in hand, ready to enjoy an easy two-mile walk and then some welcomed refreshments afterward.
Campaign Corner END_OF_DOCUMENT_TOKEN_TO_BE_REPLACED