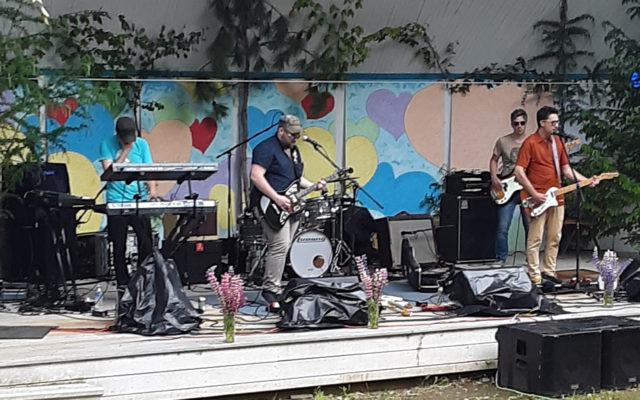 People came from across New England to enjoy Arootsakoostik 2019

Concert-goers were treated to nine musical acts from noon until 8 p.m., in addition to several food vendors. 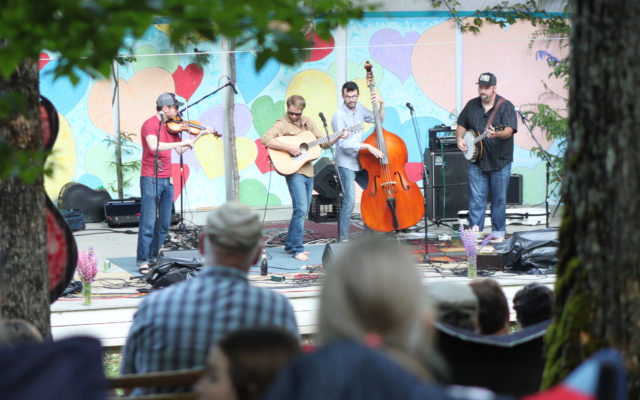 Nestled in the woods of Thomas Park, the Arootsakoostik Music Festival provided tunes from many Maine bands, like Tricky Britches rocking the stage in this image, at the annual event that entertains hundreds of people every year. (Andrew Birden)

He said he “couldn’t be more pleased” about the number of people who attended.

Children and adults relaxed on the grass and on the benches in the park and danced in front of the stage throughout the day. With the music varying between folk, roots, country or rock, the audience responded enthusiastically to all of the acts.

Rich Bothfeld of Hallowell said this was his first time at Arootsakoostik. “It’s a real super event — it’s beautiful to see such a good collection of people,” he said, noting that the crowd consisted of all age groups.

Sitting with Tim Cyr and Emerson Duplissie-Cyr, Bothfeld and his companions praised the acoustics of the amphitheater at Thomas Park. Cyr said that his father had played in a band in the amphitheater decades ago.

Built in 1937, the Thomas Park amphitheater or Music Bowl is an icon of Aroostook County.  It underwent major repairs in 2012 and often hosts a wide variety of concerts.

Sigrid Houlette and Kurt Margeson of Misfit Farm in nearby Westmandland offered chili, cornbread and a variety of farm-raised goods at the event in exchange for donations. They have been providing food at the event for three years. 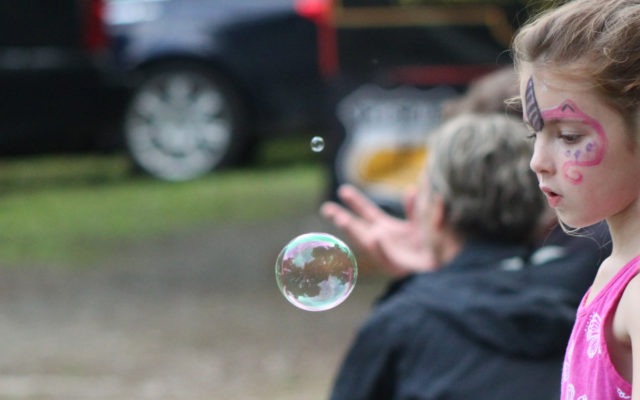 Along with the great music, folks who had the pleasure of attending the Arootsakoostik Music Festival were able to enjoy many other activities, including facepainting and soap bubbles. (Andrew Birden)

“We try to use mostly stuff from the farm,” said Houlette. The cornbread was made from rare heirloom Abenaki Flint corn the pair grows on the farm. They also offered homemade blueberry smoothies.

Local coffee roaster Storibord was on hand with a variety of brews.  Pizza, hamburgers and desserts were available throughout the day through a variety of vendors.

Cyr is already planning for the 2020 edition of Arootsakoostik. A County native, Cyr said, “I used to throw a frisbee in that field,” pointing to the grassy field overlooking the center of New Sweden. A noted musician and performer, Cyr started Arootsakoostik because of his love for Maine-made music.

“I wanted to bring that up here and share it with the community,” he said. Repeatedly expressing his gratitude to the local community, Cyr added “I feel so lucky to do this.”

When asked about plans for future events, he said, “It would be a shame to stop.”

Arootsakoostik 2019 came to a close as dusk fell on the small rural town of New Sweden.  Children and adults wandered to their cars on the edge of the park as any remnants of rain cleared out. More than a few people could be heard talking about next year’s event.

Information on upcoming Arootsakoostik events can be found on the festival’s Facebook page.

Maine is more than eight months into Medicaid expansion under the federal Affordable Care Act and trends around who is enrolling and where they live are starting to emerge, bucking some expectations and pointing out access challenges.
Pets END_OF_DOCUMENT_TOKEN_TO_BE_REPLACED