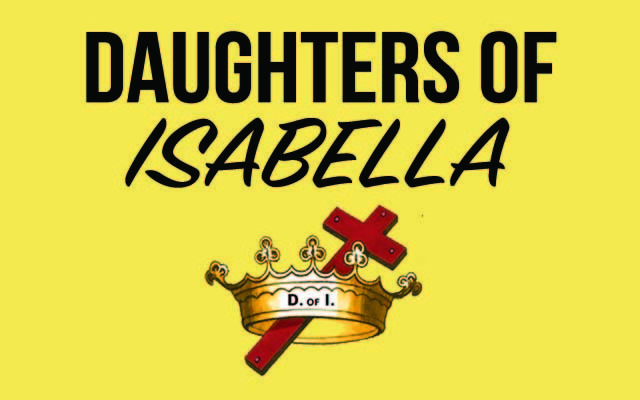 CARIBOU, Maine — April and spring has arrived in Northern Maine.  The Daughters of Isabella met on April 2, 2019 at 6 p.m.  Theresa Dube was our April birthday winner. Happy Birthday was sung for all having April birthdays.  The winner of our 50/50 drawing was Cheryl Bossie who donated money back to the Circle. Also, a drawing was held for tulips and the winner was Claire Randolph.

Chancellor Elizabeth Long led the Circle in Opening Prayer, followed by recitation of the Pledge of Allegiance.  Opening Ode was sung.

Roll Call of Officers was conducted resulting in 15 out of 19 officers in attendance.

Recording Secretary Jeanine Morneault read the March minutes.  Elizabeth Long motioned to accept as read, with a second motion by Deb Chabre; all in favor.

Communications to the Circle includes:  note from Judy Bougie and Elizabeth Beaulieu.  Madeline Guerrette mentioned she had been approached by Rising Hill to prepare of pan of brownies for an event.  Thank-you note from Diane Saucier was read; Teena Sirois shared that member is at the Caribou Nursing Home on a permanent basis; Elizabeth Long shared that a member’s son passed away and the funeral Mass would be at Holy Rosary on Saturday, April 13th, followed by a reception at Rose Acres. There was no state or international correspondence.

Scribe Bea Pirie has sent article to the Aroostook Republican.  Regent Elaine would like to see our articles to focus on social activities and volunteering efforts of the Daughters of Isabella.

Gail Hjort reported no new layettes were distributed this month.  Diane Adams made 4 sweater sets and blankets. Two sets were given to Deb Chabre to give away.

Dolores Martin reported no winners from February drawing for the 40-week club.

Regent Elaine reminded us to continue praying for our seminarians and to pray our monthly Rosary.  Thank you to those who helped with the Stations of the Cross and the Soup Supper during Lent. April 27th the daughters gathered, at 1 p.m. for lunch catered by Frederick’s Southside, for a short program and to attend 4 p.m. Mass together.

Regent Elaine reminded the daughters to bring in items for the Mother’s Day Basket for the State Convention.  Members were informed that Bea Pirie submitted an entry for the Essay contest. The discount cards are selling and the ladies are encouraged to keep up the good work. The Circle had invited

Chancellor Long read spiritual reflection, which focused on the Third Sorrowful Mystery – Crowning with Thorns.  Chancellor Long led Circle in Closing Prayer and the praying of the Memorare. Meeting adjourned at 7:25 p.m.

A few years back the Ark was gifted with something that we never dreamed possible. It is a gift that left us speechless and opened a whole new door for us.
Campaign Corner END_OF_DOCUMENT_TOKEN_TO_BE_REPLACED