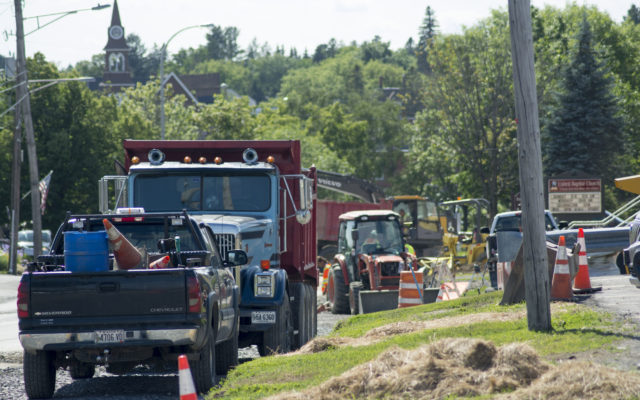 Chris Bouchard • July 11, 2019
The first phase of a project to fix High Street in Caribou should be complete by late July or early August, making way for the second phase of the project, which involves city employees adding two inches of new asphalt to the high-traffic roadway.

CARIBOU, Maine — The first phase of a project to fix High Street in Caribou should be complete by late July or early August, making way for the second phase of the project, which involves city employees adding two inches of new asphalt to the high-traffic roadway.

Caribou Public Works Director Dave Ouellette said that lead contractor Trombley Industries is working on installing underground pipes and basins beneath the roadway, which will be a tremendous help with the street’s stability moving forward.

This phase of the project also involves the installation of Americans with Disabilities Act-compliant sidewalks on the side of the street with the Caribou Public Library and Hannaford. Ouellette says this work, which will cost $564,000, should be complete at some point between late July and early August, and is funded completely by the Maine Department of Transportation.

The next phase will consist of city employees creating an ADA-compliant sidewalk on the other side of the road from the Caribou Police Station up to Goldfrank street, using a large milling machine to mill the top surface, and then adding two and a half inches of new asphalt to the road.

“When the milling machine comes into it,” said Ouellette, “the estimate comes out to about $190,000, and that includes trucking costs to haul the old milling away. We’re doing this as part of an MPI (Municipal Partnership Initiative), which means the costs for this phase of the project will be split 50/50 between MDOT and the city.” 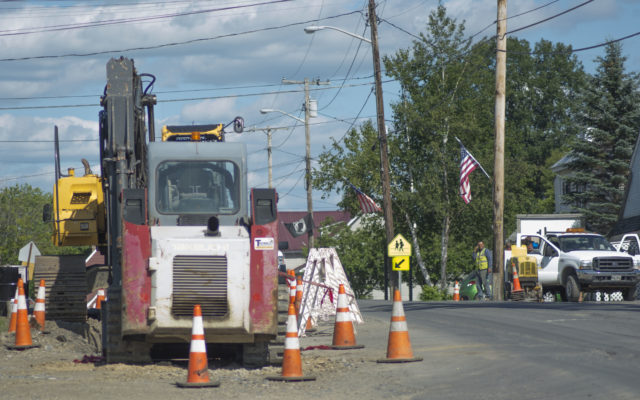 Contractors with Trombley Industries are seen here on July 10 working on the first phase of a project to repair High Street in Caribou.
(Chris Bouchard)

The second phase of the project, according to Ouellette, will begin no later than 14 days after completion of the first phase.

The city has had money set aside for this project for nearly 20 years, and Ouellette said open communication with MDOT throughout that time has led to the opportunity to do the work at a heavily discounted rate.

The public works director said this summer he is also going to request another MPI deal for two more streets in Caribou: the stretch of North Main Street leading from the bottom of the hill up to the roundabout near Cary Medical Center, and a portion of Sweden Street leading from First Choice Market & Deli to an area of the street that recently received new pavement.

High Street, however, was among the city’s top priorities as it not only needed extensive work but is one of the highest traffic volume roadways in Caribou, dealing with the weight of approximately 9,000 vehicles every day, according to Ouellette.

There are still several weeks to go until High Street is complete, and during that time flaggers will be directing traffic to ensure that no accidents occur.

“We appreciate that people are being patient,” Ouellette said. “We have to make a mess in order to make it better. It will be worth the wait.”

For all it does to refresh us, burn energy and keep us sharp, we all need playtime, dogs and cats included. Sharing playtime with pets has the added benefit of strengthening the bond between us, so we better understand one another.
Campaign Corner END_OF_DOCUMENT_TOKEN_TO_BE_REPLACED