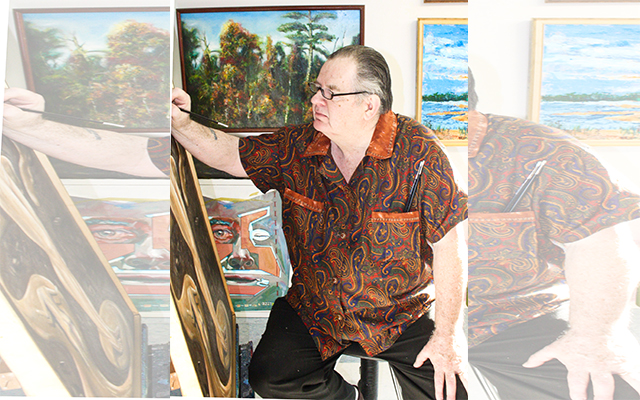 Joseph Cyr • July 12, 2019
For years, Houlton artist and chess master Roger Morin honed his craft in the Shiretown and readily passed that knowledge on to others.

HOULTON, Maine — For years, Houlton artist and chess master Roger Morin honed his craft in the Shiretown and readily passed that knowledge on to others.

Morin, 74, died at his home on Court Street, Monday, July 8. A celebration of his life will be held at 11 a.m. Saturday, July 20, at the Unitarian Universalist Church of Houlton, 61 Military St.

Born Dec. 23, 1944, in Auburn, Morin grew up in the Lewiston-Auburn area. According to his obituary, Morin left school and started working as a truck driver, a side blaster at a shoe factory, worked in construction, and was a kitchen manager at Dunkin’ Donuts in Wells.

Along the way he earned his GED so he could attend college. He took several courses and later taught many art classes, becoming a celebrated local artist.

A chess master, Morin was a two-time state champion in Maine. He enjoyed passing on his knowledge of chess and mentored and coached many young players while coaching the chess team for Houlton High School.  He was a Mason and a member of the Monument Lodge No. 96, as well as a member of the Unitarian Universalist Church in Houlton.

According to a Feb. 15, 2012, article in the Houlton Pioneer Times, featuring his Houlton Art Studio, Morin started doodling at a very young age, but took on a serious passion for art at the age of 14. He attended an Indianapolis arts institute and eventually studied art in a university setting.

He and his wife Lois moved from Wells to Houlton in 2003, where he opened Houlton Art Studio. “People in this area like art,” he said in the article.

He also sold paintings to collectors from as far away as North Carolina and Connecticut, but painting for a profit was never his purpose. “It’s the joy of it and almost every painting I do is joyful, whether a quick painting, or a slow one, I just love it,” he had said.

Houlton attorney Richard Rhoda said Morin’s legacy will live on through his artwork. Morin was the person who painted the sky scene hidden underneath the town’s clock tower atop the District Court House. At night, when standing in front of the Court House, portions of that scene can be viewed from the street.

In 2010, Rhoda commissioned Morin to recreate the iconic image of a lone man standing in front of a row of tanks in Tiananmen Square in Beijing, China.

“Roger was a man of great passion for his art and his obsession for chess,” Rhoda said. “Honestly, his art passion began when he answered a comic book ad to learn to be an artist when in the fifth grade or so.”

Frank Sullivan, a fellow artist in Littleton, said he was saddened to hear of Morin’s passing.

“I first connected with Roger through art, shortly after moving to Maine, but you couldn’t meet Roger without being made aware of his love of chess,” Sullivan said. “In the summer of 2016, my son Damien, who was 12 at the time, had become fascinated with chess, bringing a set to the Just for Kids program everyday and playing with the kids there. When I ran into Roger that summer, I shared Damien’s new found love of chess with him and he invited me to bring Damien to his studio the following Tuesday afternoon for a chess lesson.”

Sullivan said Morin gave his son chess lessons every Tuesday that entire summer, but would not accept any payment for his time. “He simply loved sharing his knowledge and passion for the game with anyone and everyone,” Sullivan said.

When Damien started seventh grade that fall, Morin invited him to join the Houlton High School chess team. “During that time, he (Morin) was an incredible mentor, always challenging Damien (and all of his teammates) to become better players,” Sullivan said. “He always gave graciously of his knowledge and his time, often driving the kids to tournaments as far away as Bangor, so they could play against a variety of players.”

Damien Sullivan added, “I met Roger years ago when I was fascinated by the game of chess. Ever since then, not only has he been an amazing chess coach, but he’s been an awesome and funny person to be around. He always made me excited to go to chess club every Monday. Chess club will never be the same without him.”

Tiffiny Chase of Houlton said Morin was very supportive to her daughters, who expressed an interest in chess. “He was very encouraging to both girls and even brought in a ‘Women in Chess’ magazine to show the girls other females who were successful (in the sport),” Chase said. “Brooke and Kansas were the only girls in chess club and he went out of his way to make sure they knew girls were excellent chess players even if it’s (a sport) dominated by men.”

“That’s what I do,” he stated in the article. “I paint and I play chess. It’s a perfect life.”

Online condolences may be expressed on the Tribute Wall at: www.dunnfuneral.com

Just when we thought we were out of the woods with kitten season, it has hit full force.  The past few days have been difficult answering the phone and hearing the stories of why people have litters of kittens they need to surrender.
Campaign Corner END_OF_DOCUMENT_TOKEN_TO_BE_REPLACED