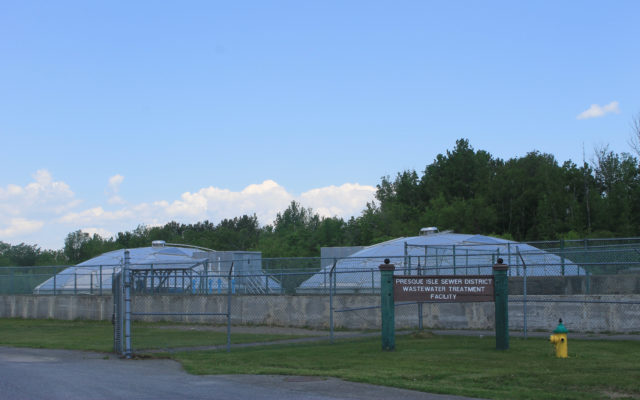 Anthony Brino • July 18, 2019
The Presque Isle Utility District’s wastewater sludge is piling up while it waits for the results of soil tests for the synthetic chemical PFOS before it can resume spreading the material on its hayfields.

PRESQUE ISLE, Maine — The Presque Isle Utility District’s wastewater sludge is piling up while it waits for the results of soil tests for the synthetic chemical PFOS before it can resume spreading the material on its hayfields.

Normally the utility would have started spreading its sludge on the fields in June and July, but it has been waiting on the tests and is getting close to filling its storage space, according to utility district superintendent Frank Kearney.

“We still have storage, but I don’t think more than a month,” Kearney said, adding that the wastewater treatment generates about 10,000 gallons of sludge per week.

At the utility’s July board of trustees meeting, Kearney said the soil tests should be finalized this month and that he’s hoping they will be within the state government’s established limits.

The chemicals in the Perfluorooctanesulfonic acid or PFOS family have long been used in fire suppression, non-stick cookware and consumer and industrial products. They’ve recently emerged as a public health concern, as they do not readily break down and they create health risks in high concentrations.

In March, after a high profile case of contamination at an Arundel dairy farm, the Maine Department of Environmental Protection required water utilities to stop spreading wastewater sludge on fields until they tested for PFOS in sludge and soils where the material is being applied.

The state has established an upper limit of 5.2 parts per billion in soil for PFOS.

Like other water utilities, the Presque Isle Utility District has traditionally disposed of the remnants of its treated wastewater by applying it as a fertilizer. In Presque Isle, the sludge is applied to more than 200 acres of hayfields that are harvested by a private company for animal bedding.

The utility’s sludge has been tested and found to contain 29 parts per billion of PFOS, Kearney said. Now they are awaiting tests of the fields’ soil to determine if the background levels are under the 5.2 parts per billion threshold and can accept more sludge without exceeding it.

The tests are being done by a private lab and are overseen by the Maine Department of Environmental Protection. Based on the tests, in concert with the DEP, “We’ll decide how we can spread it on the ground and how diluted it’s got to be,” Kearney said.

The PIUD has traditionally spread the wastewater, but now can also inject it into the soil, which reduces odor problems, Kearney said. The utility has added to its long-term planning the goal of potentially acquiring dewatering infrastructure, so that sludge could be turned into a semi-solid and sent to a landfill if needed. That, however, would be years away.

The sources of the PFOS chemicals in Presque Isle’s wastewater are not clear, but among the known contributors are human waste, in addition to industries such as paper mills. According to the U.S. Centers for Disease Control, most Americans have one or more PFOS chemicals in their blood as a result of exposure from things like fast food packaging and non-stick cookware.

“We’re really in the first day of the next 10 years of this thing,” Kearney said of the global PFOS issue.

“There are going to be a lot of landowner ramifications. A lot of municipal and industrial companies have been spreading sludge on private land,” Kearney said.

The Presque Isle Utility District and most other water utilities have not tested drinking water supplies for PFOS chemicals, Kearney said because neither the state nor federal governments have required it.