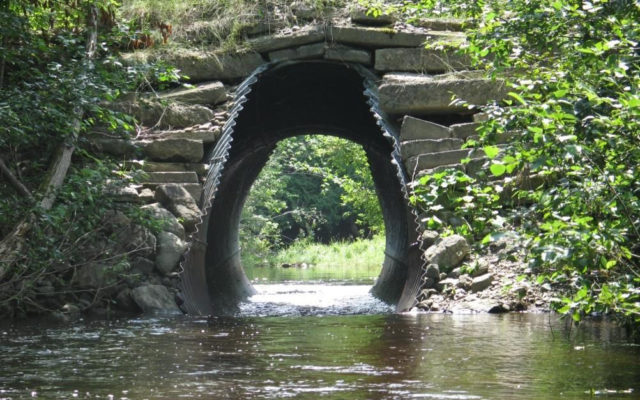 Joseph Cyr • July 18, 2019
The town has moved one step closer to replacing a deteriorating culvert on the Morningstar Road, near the Tate and Lyle Ingredients plant, thanks to funds from the Department of Environmental Protection.

HOULTON, Maine — The town has moved one step closer to replacing a deteriorating culvert on the Morningstar Road, near the Tate and Lyle Ingredients plant, thanks to funds from the Department of Environmental Protection.

Houlton Town Manager Marian Anderson said Monday, July 15, that the town received a grant of $95,000 from DEP for the project.

Structural issues connected to the culvert under Morningstar Road have been an ongoing concern for many years for the town.

“This is a project that has been in the works for a long time,” explained Nancy Ketch, Houlton’s community and economic development director. “The culvert is failing, so this is something that does have a sense of urgency, but has also been in the works since at least 2014.”

When water overflowed onto the road in 2010, a more proactive effort was put into motion to have the culvert replaced. According to Ketch, a  number of entities have evaluated the site in the following years to assess the magnitude of the problems and to develop cost estimates for replacement of the culvert.

The Morningstar Road culvert is oval shaped and is about 9.5 feet wide by 14 feet high by 100 feet long, according to the town’s application to the DEP. A 2014 Maine Department of Transportation Bridge Inspection Report of the Morningstar Bridge showed that the plate pipe culvert is distorted and the west side of the pipe has a 20-foot continuous crack at the bolt line; the roadway is cracking from culvert movement; the outlet is undermined and there is a large scour hole downstream; and the downstream retaining wall has failed.

According to a press release from the DEP, the department received 40 applications to review which totaled over $3 million dollars in fund requests. A total of $2.5 million in grant money was approved in this round of applications.

These monies fund competitive grants that match local funding for the upgrade of municipal culverts at stream crossings and must be located on a municipal road. The projects awarded will: benefit public infrastructure by replacing several culverts that are currently failing and at risk of complete washouts; open fish spawning habitat; eliminate undersized and other impassable culverts; and reduce some of the worst ongoing erosion affecting streams, brooks and lakes.

Should the culvert give out and the road collapse, there would be no access to the Tate and Lyle Ingredients plant, which is one of the town’s larger employers with 35 full-time employees.

The Houlton project was put out to bid last summer to see if the cost estimates were accurate. Because the project will likely run somewhere in the neighborhood of $700,000-$800,000, the DEP funds are merely one part of the larger puzzle.

In addition, the town has applied for a $585,000 Federal Emergency Management Agency grant, Ketch said. She added that the Houlton Band of Maliseet Indians also have been involved in the plans, helping to secure additional grant money.

“Until we hear about the FEMA grant, we are kind of stuck in a holding pattern,” Ketch said.

Only one member of Maine’s congressional delegation had come out in favor of impeaching President Donald Trump ahead of House Speaker Nancy Pelosi’s Tuesday announcement that the Democratic-led House of Representatives would begin an impeachment inquiry.
Pets END_OF_DOCUMENT_TOKEN_TO_BE_REPLACED

We think a cat can make for the best pet in the world. To truly love a cat, you must learn to accept them for what they are -- unpredictable and quirky, which is something unique and unlike any other pet.
Campaign Corner END_OF_DOCUMENT_TOKEN_TO_BE_REPLACED