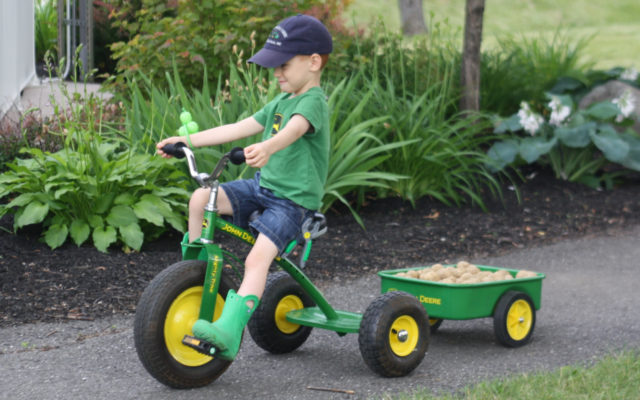 The Perth-Andover, New Brunswick-based Wednesday Evening Fiddlers, consisting of nearly 30 musicians of various ages, performed dozens of fiddle tunes that had the crowd of around 100 people clapping in support. Many people brought lawn chairs to Fields Lane in front of the bandstand to enjoy the music that has become a festival favorite.

During their performance, the Fiddlers showcased several young musicians who have played regularly with the group, including 11-year-old Sophie McLaughlin of Perth-Andover and 12-year-old Hannah Chartier of Fort Fairfield.

The Wednesday music event proved to be a great opportunity for new and lifelong friends to gather with one another. That was what happened when longtime friends April Caron of Caribou and Mary Faulkner of Fort Fairfield ran into each other during the performance.

“We don’t get to see each other very often, so the festival gives us a chance to catch up,” Caron said. “I usually see a lot of people that I haven’t seen in a while. I know friends who are coming from Washington State for the festival.”

Both Caron and Faulkner said they were looking forward to festival events such as the Maine Potato Blossom Parade on Saturday and other musical performances scheduled at the bandstand.

“I don’t know of any other festival in the area that’s like this,” Faulkner said. “It’s a lot of fun for families.”

Across from the bandstand, more than a dozen families gathered at the town clock near Main Street to line up for the annual Baby and Bike Parade. This year the parade had the theme of “At the Circus,” which inspired children and parents to decorate bicycles, strollers, wagons and baby carriages with festive decorations. Many children donned red clown noses and creative costumes as Anah Shrine Clowns led them to Fields Lane and around the bandstand.

Lilian Alice Tilmond, 4, stole judges’ hearts to win the top prize in the pre-K division for her colorful Big Top float in which she played the role of famous Disney elephant “Dumbo.” In the school-aged children’s division, Karmon Hitchcock, 8, won for decorating her bicycle with balloons, jewelry, streamers and circus “monkeys.”

The bike parade was a fun event for all who participated, including Amber Watson and her 2 ½-year-old son Hudson Helstrom of Fort Fairfield. Watson said she looks forward to passing on Potato Blossom traditions such as the parade, fireworks and family time to her son.

“We have a family reunion every year during the festival and that has become a big tradition for us,” Watson said.

Weekend events for the Maine Potato Blossom Festival include mashed potato wrestling at 6 p.m. on Friday, the parade at noon on Saturday and the new Tater Tot 5K and Tough Tater one-mile obstacle course on Sunday at 9 and 10 a.m, respectively.

For a full schedule of events visit https://fortfairfield.org/ or the festival’s Facebook page.

Maine is more than eight months into Medicaid expansion under the federal Affordable Care Act and trends around who is enrolling and where they live are starting to emerge, bucking some expectations and pointing out access challenges.
Pets END_OF_DOCUMENT_TOKEN_TO_BE_REPLACED