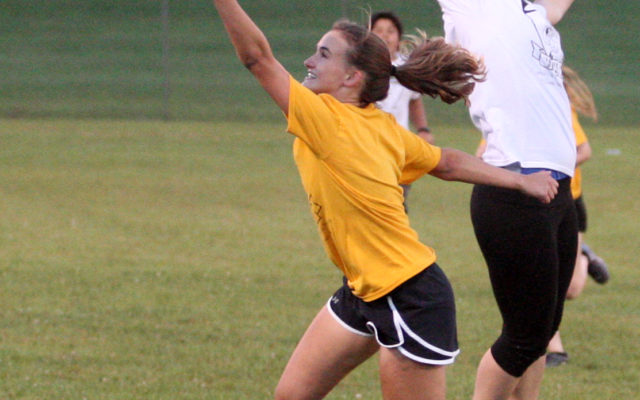 Contributed • July 23, 2019
The Houlton Ultimate Summer League (HUSL), now in its seventh season, has reached the midway point for the 2019 edition of the league.

HOULTON, Maine — The Houlton Ultimate Summer League (HUSL), now in its seventh season, has reached the midway point for the 2019 edition of the league.

The second game featured WHOU versus Dr. Karl P. Woods Dentistry. WHOU took an early lead that they held until the end, winning with a score of 11-8.

Week two began with Dr. Karl P. Woods Dentistry against Life by Design. This game took a little while for one of the teams to score, but after the first goal, Dr. Woods Dentistry kept the momentum going taking a 6-0 lead into halftime. Life by Design came out of half-time and scored the first two points, but Karl P. Woods scored the next 5 points to win the game 11-2.

In week 3, WHOU took on Life by Design. Life by Design controlled the game most of the way earning them their first win of the season with a score of 11-8 which also bumped them into third place in the rankings.

Week four had two tightly-contested games with Carmichael Masonry taking on Life By Design. Masonry scored first and maintained the lead throughout a majority of the first half. Masonry took the first half 6-4. To start the second half, LBD scored twice, but after a few personnel changes and the impending soft cap timing rule nearing the end of the game Masonry was able to sneak out a couple of quick scores and seal the win, 8-6.

The second game had WHOU playing host to Dr. Karl P. Woods Dentistry, the game went back and forth with several lead changes, but ultimately WHOU prevailed with a consistent offense each trip to the endzone. Turnovers hurt the Karl P. Woods team as they ended with a score of 11-9 in favor of WHOU.

The 2019 season will run until the postseason tournament on Sunday, Aug. 4 at the Bob Ruth Field of Houlton’s Community Park.

Only one member of Maine’s congressional delegation had come out in favor of impeaching President Donald Trump ahead of House Speaker Nancy Pelosi’s Tuesday announcement that the Democratic-led House of Representatives would begin an impeachment inquiry.
Pets END_OF_DOCUMENT_TOKEN_TO_BE_REPLACED