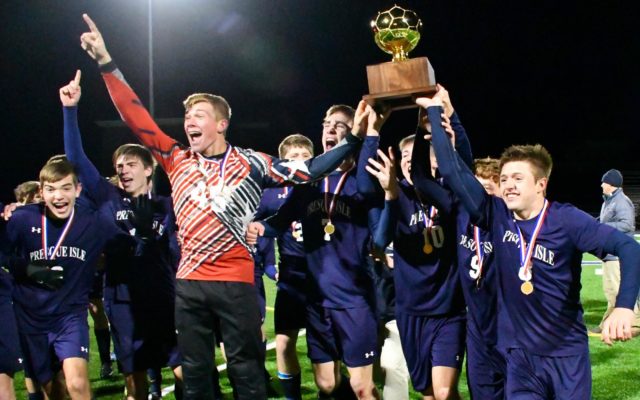 Occasionally when Tim McCue walks the hallways of Presque Isle High School as SAD 1’s director of security, he’ll meet a member of the Wildcats boys soccer team and they’ll share a memory.

Not just any memory, but video of Presque Isle’s come-from-behind 3-2 double-overtime victory over Freeport last November that earned the program its first state championship.

“It was a lot of fun to be involved with,” said McCue, the Wildcats’ varsity assistant boys soccer coach for the last 11 years. “I still have the YouTube highlights on my phone and every now and then I’ll see one of the kids in the hall and I’ll say remember this and pop it up on my phone and we’ll watch it together.

McCue now is eager to build on those championship memories as the Wildcats’ new head coach after replacing Joe Greaves, who stepped down from an eight-year tenure when he was appointed assistant principal at Presque Isle High School.

McCue, who previously served for 25 years as a police officer in the Star City, is a longtime coach in the Presque Isle school system, most recently with the boys soccer, girls basketball and softball teams.

“I’m humbled by the opportunity,” he said. “I’ve been involved with the Wildcat coaching staff for 25 years in different sports and 11 years as the soccer assistant, and now I get a chance to step up after our first state championship. It’s truly an honor for me.”

McCue has been leading 25 to 30 high school players through the school’s summer soccer program in anticipation of returning to the Class B soccer wars this fall as well as to the new artificial turf just installed at the Gehrig T. Johnson Athletic Complex, where the Wildcats practice and play their home matches.

“We lost quite a few seniors, but we’ve got younger kids stepping into those spots and a lot of them were on the team last year and didn’t get a lot of playing time but they’re going to be able to step in this year,” said McCue, who will be assisted on the Presque Isle sideline by Brian Cronin, a former girls varsity soccer coach at the school and more recently the boys junior varsity soccer coach.

“They’re good athletes and great young men, they work hard and understand what it takes to get to the state-championship level. I think that bodes well for us.”

McCue said that based on what he’s seen from his players this summer, they’ve learned well from the elder statesmen on last year’s title team who led Presque Isle to a 15-1-2 record.

“They knew what they wanted to do and just went to work and it was fun to watch kids who were that focused on a goal,” McCue said. “These kids saw that and coming into this summer I’ve seen the same things from them. It’s  ‘what do we do next, how do we get better?’”

Presque Isle is scheduled to begin preseason practices on Aug. 19, with its regular-season opener set for Sept. 7 at home against Mount Desert Island of Bar Harbor.

Only one member of Maine’s congressional delegation had come out in favor of impeaching President Donald Trump ahead of House Speaker Nancy Pelosi’s Tuesday announcement that the Democratic-led House of Representatives would begin an impeachment inquiry.
Pets END_OF_DOCUMENT_TOKEN_TO_BE_REPLACED

Last week, we received a phone call about a cat that was in desperate need of help. The young lady said she found a cat that was very skinny and crying and that there was blood in the snow.
Campaign Corner END_OF_DOCUMENT_TOKEN_TO_BE_REPLACED