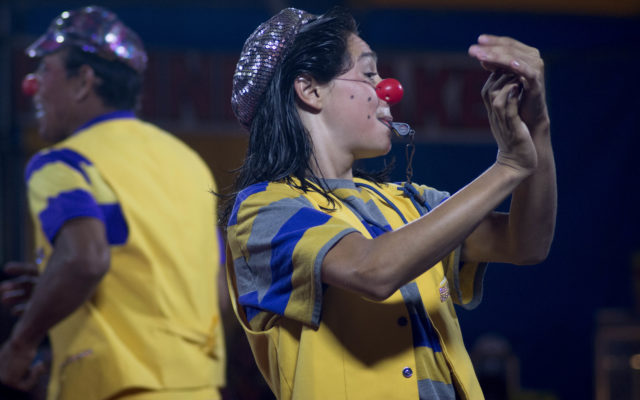 Chris Bouchard • August 7, 2019
The Zerbini Family Circus wowed guests with death-defying stunts, tightrope walking, juggling and animal performances during an Aug. 2 showing in a big top tent next to the Wellness and Recreation Center on Bennett Drive.

CARIBOU, Maine — The Zerbini Family Circus wowed guests with death-defying stunts, tightrope walking, juggling and animal performances during an Aug. 2 showing in a big top tent next to the Wellness and Recreation Center on Bennett Drive.

Ringmaster Julian Zerbini, a ninth generation circus performer in the Zerbini family, has been master of ceremonies for the family circus for more than six years, and said this is his first time for bringing the show to Caribou.

“We’ve had this show going for 27 years and this is our first time coming up this far north,” said Zerbini. “The city of Caribou was nice enough to tell us that they would like the circus here, and were coming up through Maine anyway, so we made it one of our stops.”

The circus was in Danforth just one night before its first Caribou show, which Zerbini said had a good turnout with “quite a few people who really liked the show.”

While this particular iteration of Zerbini’s big top circus show has been active for 27 years, the Zerbini family has been in the circus “for over 250 years,” according to its social media page.

Based in Florida, the Zerbini family travels all along the East Coast to Maine, making numerous stops along the way.

Zerbini said that he encourages people to come and develop their own opinion about the circus and its treatment of animals before jumping to any conclusions.

“A lot of people have mixed emotions about that,” he said, “but animals are our No. 1 priority here in our circus. They eat before we do, and get taken care of before we do. I’ve been growing up with animals my entire life. They’re a part of our family.”

Caribou Marketing and Events Coordinator Christina Kane-Gibson said that officials from Animal Control stopped by for a routine check-in before the first show and were “very happy to see that the animals were well-loved and very well cared for.”

“People should give it a shot,” Zerbini concluded. “If you’ve never been to a circus, then come out and see it.”

The circus put on a total of three shows in Caribou, with two occurring on Aug. 3. Several hundred were in attendance and Kane-Gibson said the bleachers were full each time she checked in on the shows.

The events coordinator said the Zerbini Family Circus was “a very, very professional group,” and “wonderful to work with.”

“We were very impressed by the care they took of our facility and parking area,” she said, “and the great show they provided for our community.”

Kane-Gibson concluded that she would definitely invite them to come to the city again, adding that families in attendance seemed to have a great time.

Maine is more than eight months into Medicaid expansion under the federal Affordable Care Act and trends around who is enrolling and where they live are starting to emerge, bucking some expectations and pointing out access challenges.
Pets END_OF_DOCUMENT_TOKEN_TO_BE_REPLACED