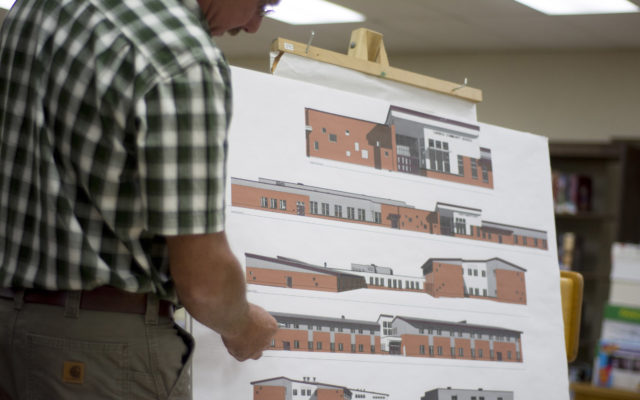 Chris Bouchard • August 9, 2019
Pre-K-eight students in the Caribou area will, in just over one year, begin attending a brand new school on Bennett Drive. Between now and then, contractors have an incredible amount of work ahead of them.

CARIBOU, Maine — Pre-K-eight students in the Caribou area will, in just over one year, begin attending a brand new school on Bennett Drive. Between now and then, contractors have an incredible amount of work ahead of them.

Members of the RSU 39 school board, which consists of Caribou and Stockholm, heard an update from Gregg Bouchard, clerk of the works for project architect PDT Architects of Portland.

RSU 39 Superintendent Tim Doak, who introduced Bouchard to the board during an Aug. 7 meeting, commended him for the work he’s done on the project.

“Gregg’s work has been phenomenal,” Doak said. “He has a great background working with the University of Maine System in Orono; he knows schools, and we’re very lucky to have him on this project.”

Bouchard showed the board a series of design images that were blown up to poster size, one of which was a rendering of the new school’s final appearance. He then outlined some of the project’s current highlights.

As of Aug. 6, for example, Bouchard said Soderberg Construction, one of the primary subcontractors, finished excavation, which he referred to as a significant milestone.

Soderberg Construction, according to Bouchard, is responsible for about a quarter of the project in terms of financials, as they are taking care of earthwork, demolition of former school buildings, removal of hazardous materials, and concrete work.

“They’ve taken on an enormous chunk,” said Bouchard, who also commended the team of contractors that lead contractor Bowman Constructors of Newport lined up for the project.

In addition to building a new Pre-K-eight school, the project also involves creating a new park across the street this year and demolishing both the Caribou Middle School and Teague Park Elementary School after the new school is finished in 2020.

“The park deadline is Sept. 20,” said Bouchard, “which is coming right up. I’m not too worried about that since about 93 percent of what needs to be done is earthwork, and Soderberg has the capacity and equipment to get that done. It’s coming along nicely.”

Bouchard and the board also discussed the upcoming need to seal and heat the new school building before the snow begins to fall, as contractors plan to work continuously until next August.

Doak said the current plan is to seal the building by mid-November, and Bouchard explained why these measures are so important.

“In order for the contractors to put up drywall, the building has to be 55 degrees,” Bouchard said. “Part of what I do is monitor temperatures, and if it’s not up to the required temperature, they can’t do the work. On drywall, if it’s too cold during installation and the building warms up, it’s going to look awful.”

Bouchard’s job requires writing daily reports on the current work, most of which are often close to 20 pages in length.

He also updated the board with some “fun numbers” in relation to the project’s progress.

One school official in the audience asked the board how parking will be handled once school starts.

Doak said this issue is currently being worked out, adding that he has spoken with Caribou Parks and Recreation Superintendent Gary Marquis about utilizing parking space across the street. There also may be additional space near the RSU 39 Administrative Building on Glenn Street.

Bouchard ended his presentation by praising the work of all of the subcontractors hired to work on the new school.

“Bowman probably performs about five to seven percent of the work on the project,” he said. “Other than that, they have all of these subcontractors, and the group that Kevin Bowman has lined up is phenomenal. It’s the A-Team. I’ve worked with [Bowman] downstate for many, many years, and I’m very pleased to work with him up here. It’s going to be a lot of work in one year, but we’re going to get it built.”

Maine is more than eight months into Medicaid expansion under the federal Affordable Care Act and trends around who is enrolling and where they live are starting to emerge, bucking some expectations and pointing out access challenges.
Pets END_OF_DOCUMENT_TOKEN_TO_BE_REPLACED