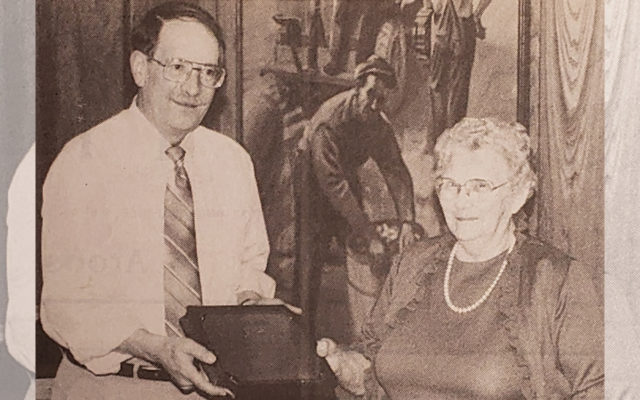 Compiled by Yvonne Tardie, Special to The County • August 12, 2019
A very generous and broadminded woman made a donation to the “Melting Pot” and left her basket to call for it.

Donation — A very generous and broadminded woman made a donation to the “Melting Pot” and left her basket to call for it.

In taking out the gifts of silver in an old sugar bowl reposed a good “fat pocket-book” filled with greenbacks and coins. Needless to say, the owner made an early call to recover her forgotten treasure that she had slipped in the basket for convenience. She was willing to convert her silver into money, but was hardly willing to turn over her entire purse.

$25,000 for hospital drive — For the first time in a quarter century, the community of Presque Isle owned its hopital free and clear, saved from foreclosure. A total of $25,395.56 had been contributed by public-spirited individuals through the efforts of the Presque Isle General Hospital mortgage and improvement fund campaign, which opened June 1, under the leadership of Orrin J. Bishop. The mortgage of $16,231.31 on the hospital building, erected in 1919, and the mortgage of $3,675 on the nurses’ residence had been paid, leaving $5,489.25 for the much-needed improvements.

Dual cinema to locate at Plaza — Negotiations were under way for a major theater chain to locate a 500-seat Twin Cinema at the Presque Isle Shopping Plaza, officials announced. Alvin B. Allen of Boston, developer of the new shopping area located on the westerly side of Route 1 just north of Presque Isle, said the new air conditioned entertainment facility will have two screens, climate control and the new easy-chair type of seating.

Olen Holmes named to committee — Olen E. Holmes, Presque Isle, was appointed by Richard W. Homan, Sugar Grove, West Virginia, commander-in-chief of the Veterans of Foreign Wars of the United States, to serve on the organization’s National Security and Foreign Affairs Committee during the V.F.W.’s 70th Annual National Convention that was in progress in Philadelphia. In appointing Holmes, Homan said, “The V.F.W. accepted its obligation to improve and preserve the land its members have defended in past wars.”

Joined staff — David I. Dorsey, president and chief executive officer of First Citizens Bank, announced that Allen T. Sterling had joined the bank as a vice president and bank administrator in the Presque Isle office. Sterling had over 20 years of banking experience, most recently as vice president and treasurer of Skowhegan Savings Bank. He received his bachelor of science degree in business administration from Thomas College and was also a graduate of the National School of Banking graduate program. Sterling was the past president and founder of the Maine Chapter of Financial Managers Society and served as an instructor for American Institute of Banking courses. He and his family lived in Washburn.

150 years — S. W. Collins Company and the Collins family in Caribou announced the celebration of their 150th year of the family lumber business and of their settlement in Caribou. Sam Collins and his brother, Gregg, represented the fifth generation to operate the lumber business born on the bank of the Caribou Stream in 1844. The first Sam Collins, born in Bangor in 1811, together with his partner, Washington Vaughn, arrived in Caribou during the summer of 1844 for the purpose of building a saw mill and grist mill. The state of Maine was anxious to develop the northern Maine wilderness and offered title to 160 acres of land for each mill constructed. Collins and Vaughn built the mills and the lumber business was launched.