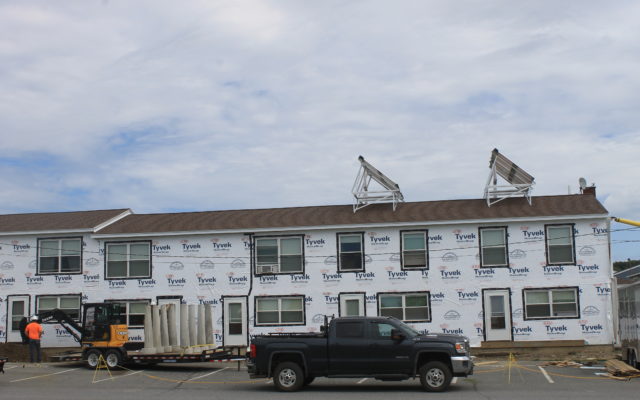 Anthony Brino • August 13, 2019
In an effort to better help people experiencing economic, housing and other challenges, the Aroostook County Action Program this fall will open a new social services unit called the Hope and Prosperity Center.

PRESQUE ISLE, Maine — In an effort to better help people experiencing economic, housing and other challenges, the Aroostook County Action Program this fall will open a new social services unit called the Hope and Prosperity Center.

The new center will launch with funding from long-time Presque Isle benefactor Mary Smith and it will serve as a one-stop shop for people to access resources for job training, housing, education, substance abuse treatment and health care, ACAP said in a press release.

This year, the nonprofit agency ACAP has seen an increasing number of families and individuals looking for help with housing insecurity, said Heidi Rackliffe, ACAP program supervisor, who will lead the new center.

Between April 1 and June 30, ACAP assisted more than 180 individuals and families who came into the Presque Isle offices near Walmart experiencing homelessness or housing insecurity, while another 42 sought help accessing shelter over the phone, according to the agency.

Those figures for the second quarter of this year “are similar to what we tracked in all of 2018,” Rackliffe said in a press release. “The demand has been overwhelming at times.”

ACAP’s Hope and Prosperity Center will be located at the 771 Main St., Presque Isle, and will offer in one space “same day access” to programs including workforce development, housing and preventative health. It will have computers for conducting job and training searches and meeting rooms for individuals and families to meet with staff and counselors from ACAP or other agencies, according to the press release.

The center will serve a noon-time meal and also be linked to the new Presque Isle bus service, the PI Loop.

“The need for this has been evident over the past year as more and more County residents in crisis have turned to us,” ACAP executive director Jason Parent said in a press release. “This is the best next step in providing more comprehensive services to our customers across The County, and continuing the expansion of our coaching services region-wide.

“Over the past several months it has become clear that the current configuration of space at our Main Street Presque Isle location is not reflective of the more extensive work our dedicated and caring staff are so effectively delivering,” he said.

ACAP’s team includes eight case manager coaches who work out of Houlton, Presque Isle, Caribou, Masawaska and Fort Kent, a team that will soon grow to 10, according to the agency.

The total amount of funding provided by Smith has not been disclosed, but ACAP said that Smith has provided funding for one year for a center director and for facility modifications.

Smith’s funding also will support a consultant to work with an advisory committee “to plan for and build support for a more comprehensive facility and long-term community solution that will better serve Aroostook County moving forward.”

ACAP is working with Homeless Services of Aroostook, which recently opened a low-barrier shelter option for individuals experiencing homelessness, to develop a long-term housing security strategy for the region.

Smith, who lives in California and hails from Presque Isle, is the daughter of the late Maine potato breeder Robert Akeley and widow of the late Silicon Valley executive Rodney Smith. Smith’s philanthropy in Aroostook County includes donations to Northern Maine Community College, Turner Memorial Library and University of Maine at Presque Isle.

“This year I became interested in the homeless problem in Presque Isle,” Smith said in a press release, describing her conservations with ACAP and Homeless Services of Aroostook.

“Since April, I have worked closely with the team at ACAP and have been impressed with their dedication and drive to support as many people as possible. I encourage those in the community who are not involved to become involved. This issue will touch all of our lives in one way or another.”

For the PI Loop bus service, Smith donated $270,000 along with $50,000 that will be matched from the Presque Isle Rotary and Kiwanis Clubs. That service, set to launch in October, will see a 36 seat, wheel-chair accessible bus running a fixed loop around Presque Isle. The route and fare pricing will be announced in September.

The PI Loop is being launched through the Going Places Network, a coalition that includes a host of Presque Isle employers and service agencies, including ACAP, Northern Light Health, the Aroostook Agency on Aging and Northern Maine Community College.

“There is a very special group of residents of Presque Isle who have gone above and beyond what is reasonable to get to this moment,” Smith said in a press release. “Their work is not done. It will continue until the bus service is running smoothly.”