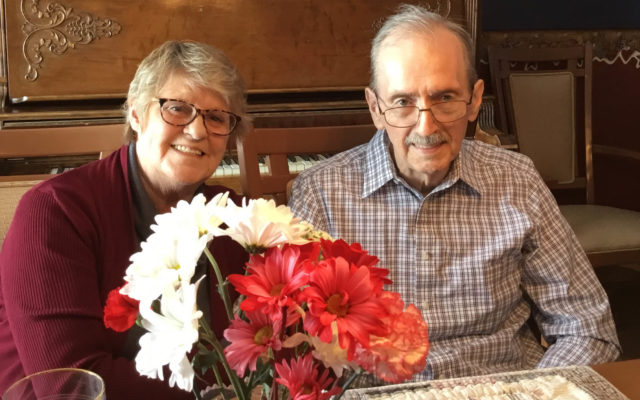 Jessica Potila • August 14, 2019
Bernard “Barney” Pelletier is well-known for being a dedicated family man, award-winning educator, and pillar of the Eagle Lake community in which he has lived for all of his 80 years.

EAGLE LAKE, Maine — Bernard “Barney” Pelletier is well-known for being a dedicated family man, award-winning educator, and pillar of the Eagle Lake community in which he has lived for all of his 80 years.

In recognition of Pelletier’s good character and many achievements, the Maine Health Care Association selected Pelletier, a current Mercy Home resident, to receive a 2019 Remember ME award.

Pelletier was born August 6, 1940, the youngest of four children to farmer Leo Pelletier and his wife Rosanna, a skilled seamstress.

By 1969 he was principal of one of the largest public schools in Maine, Fort Kent Elementary School, which at the time had 1,000 students in grades K-8.

It was there that he met his wife, fellow educator Theresa Pelletier.

The couple are the parents of daughter, Holly Pelletier, 35, of Kennebunk.

“They got along so well. Jon called him ‘Daddy Barn’,” Theresa Pelletier said. “He just treated me so well and he treated Jon like Jon was his own. He was thoughtful, just plain thoughtful.”

When Jon passed, Barney Pelletier really demonstrated his ability to stand strong for his loved ones, as he looked after Theresa and Holly.

“Holly was 15 months old and I couldn’t take care of her at the time,” Theresa Pelletier said. “Barney was strong; he was very strong, so Barney took over. He was so good and patient.”

In his free time Barney Pelletier has enjoyed hunting and fishing.

“He liked to hunt partridge and would ride around for hours and hours, and then he would come home with one bird and he would ask me to make some beans and to put the partridge in the beans,” Therese Pelletier said with a smile.

Barney Pelletier ultimately went on to become a teaching principal at St. Francis Elementary School and Eagle Lake Elementary School. He was recognized as a hero by the Maine State Police during his tenure.

In 2003, when school lockdowns were not common practice, especially in small towns such as St. Francis, Pelletier responded in a manner ahead of his time to a potentially dangerous situation. When he learned that a potentially armed parent was headed to the school, he initiated a lockdown and remained on the scene to ensure student safety until police arrived. The state police presented him with a special commendation for his actions.

An avid scholar and enduring educator, Pelletier ultimately went on to teach courses in public school law, constitutional rights and student life and the constitution and American education at the University of Maine at Fort Kent.

Throughout his life, he has been an active member of the St. Mary’s Catholic Church choir and parish council. He has been a successful real estate salesman, member of the Eagle Lake Development Corporation and Planning Board, and Catholic Order of Foresters state court, state chief ranger and state chief treasurer.

During his early years of teaching, Pelletier also took part in a Ford Foundation fellowship program studying leadership, the results of which were published in the book “Left-Handed Fastballers,” by David Nevin.

His entry in the Remember ME 2019 Recognition Ceremony Book states, “The students all knew Barney loved and respected them because he was always part of the after-school games and activities. Oftentimes he gave change to students with no money so they could have snacks and soda from the vending machines.”

Theresa Pelletier said this was in line with Barney’s character, and he has even helped some Eagle Lake residents with their taxes.

“He would do this for nothing or for a bag of potatoes just because he knew they had nothing except for their gardens,” Theresa Pelletier said. “He helped so many people.”

Only one member of Maine’s congressional delegation had come out in favor of impeaching President Donald Trump ahead of House Speaker Nancy Pelosi’s Tuesday announcement that the Democratic-led House of Representatives would begin an impeachment inquiry.
Pets END_OF_DOCUMENT_TOKEN_TO_BE_REPLACED

Last week, we received a phone call about a cat that was in desperate need of help. The young lady said she found a cat that was very skinny and crying and that there was blood in the snow.
Campaign Corner END_OF_DOCUMENT_TOKEN_TO_BE_REPLACED