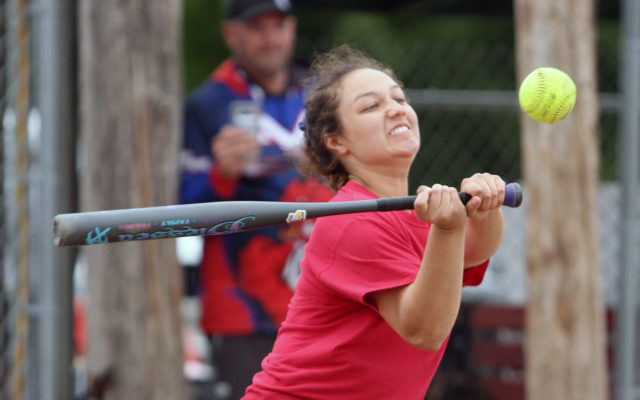 Henderson softball tourney draws friends together for 3 days of softball

Scott Sjoberg, who joined the military with Henderson and was a close family friend, welcomed those for Saturday’s opening ceremony. Emotions were high at the ceremony as Sjoberg read a couple of poems he found that spoke to him.

“I believe Aaron is looking down on us right now with that huge smile that would light up a whole room,” Sjoberg said. “We gather together to enjoy each other’s company, share some stories and have some laughs as we have fun together.”

Stephen Fitzpatrick, superintendent at SAD 70, was the principal at Hodgdon High School when Henderson was a student in the 1990s.

“Thank you all for being here, celebrating the spirit and life of Aaron Henderson,” Fitzpatrick said. “Aaron was a great individual. He was fiercely loyal to his family and friends. As a student-athlete I witnessed Aaron as a natural leader who drew people to him. He was also fun-loving with a glint in his eye and somewhat of a smirk or mischievous grin on his face that always made me wonder what he was thinking.”

Fitzpatrick added that Henderson was “always up to living, loving and laughing” and relished the competition that high school sports brought out in him.

“Aaron was more often than not that teammate who set the stage for his mates to shine,” Fitzpatrick said. “He did the work and executed the details to achieve team success.”

“These events are incredible and are the lifeblood of the Green Beret Foundation,” Flike said. “We exist to serve the needs of current and former Green Berets and their families. To be able to come here means so much to the Foundation.”

Henderson served a distinguished military career and became a highly decorated soldier. His service included assignments overseas in Japan, Iraq, Jordan and Afghanistan as a member of the Green Berets.

Saturday’s stormy weather prompted a change in the tourney to a 1-pitch event in order to get all of the games in following a couple of rain delays.

Chasing Two collected the softball trophy with an impressive 19-9 victory over Merchants in six innings. The Merchants had been undefeated in the tourney and had to be beaten twice. It marks the second straight championship for the team as the group also won last year, under the name County Yankee Grocery.

As was customary, Henderson’s former softball team Shea-D-Lane took to the field following the opening ceremony and left a spot vacant in the outfield for their former teammate.