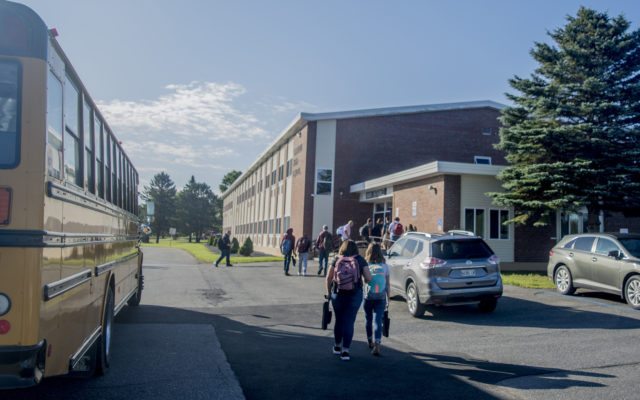 Chris Bouchard • August 17, 2019
Caribou High School is back in session with an increased student population, exterior renovations, some new flooring, and a number of new class offerings.

CARIBOU, Maine — Caribou High School is back in session with an increased student population, exterior renovations, some new flooring, and a number of new class offerings.

High school students officially began the 2019-20 school year on Aug. 14, and many likely noticed changes to the building’s front side.

“We took the opportunity to remove some of the larger trees in the front of the building,” said Caribou High School Principal Travis Barnes.

RSU 39 Superintendent Tim Doak said the tree removal opened up the view of the school, adding that the “old, damaged siding” obscured by the trees also was replaced. 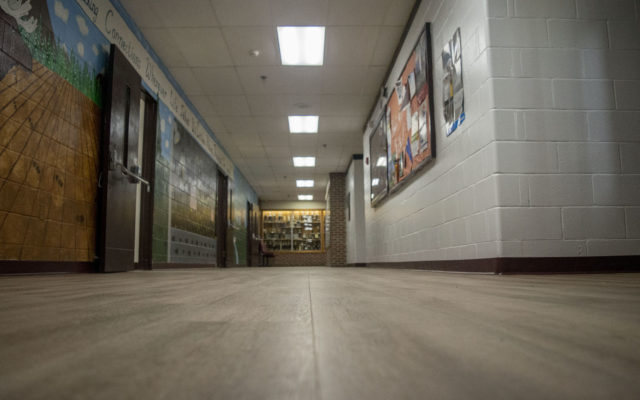 A portion of Caribou High School’s floor recently received an asbestos abatement and replacement over the summer. CHS Principal Travis Barnes says long-term plans are in place to eventually replace all of the floors, starting with the high-traffic areas. (Chris Bouchard)

“In the winter, the snow coming off the roof would collect in those trees,” Doak said. “Now it should be easier to move the snow off the roof. You’ll see a big difference when you drive up to the high school; I think it looks much better.”

“There will be a variety of messages throughout the day about sports practices, upcoming events and any information for students,” Barnes said. “We’re using it as a way to inform the student body and are hoping it will limit classroom disruptions.

Barnes said the TVs are located on the first and second floors, the main lobby and in the cafeteria.

Local contractors Sullivan’s Flooring and County Abatement also dealt with the old flooring that contained asbestos and replaced the flooring in a portion of the first floor of the school leading to the gym, library and cafeteria.

Barnes said this will continue throughout the entire school, with priority placed on “high traffic areas” first.

While Barnes said the exact numbers are not currently available for total student enrollment, the school saw a net gain of about “20 to 25 students,” with the freshman class this year having about 120 students.

Kevin St. Peter, school resource officer, will continue working at the school this year. St. Peter is a Caribou police officer with special training to work in school systems. He primarily patrols the high school, but also visits Caribou middle and elementary schools and offers counseling services for students.

“He’s in the high school 95 percent of the week,” Barnes said, “but I think for all of our buildings [in the Caribou school system] his presence has been a huge positive. We gave students someone to talk to and relate to, and it wasn’t long before we had kids in his office last year. The important part is that we want to educate the kids and keep them safe, and we want them to have a building they can feel comfortable in. I think having a school resource officer adds all of that, so we are very excited to have him on staff this year.”

Doak said that a total of eight new teachers have been hired within RSU 39 for the 2019-20 year.

This also marks the first year that Limestone is no longer a part of RSU 39, as its withdrawal from the RSU was made official on July 1. Doak said the withdrawal has had “absolutely no impact” on any schools currently under RSU 39.

With major construction of a new pre-K-eight school taking place between the middle and elementary schools, Doak said parking may prove to be a challenge this year. He said that school officials have a number of additional parking spots in mind, such as the administrative building and an area adjacent to the recreation center across the street, to help make up for the shortage.

This also marks the last year for both Teague Park Elementary School and Caribou Middle School, as both buildings will be demolished once all pre-K-eight students begin attending the Caribou Community School next year.

Doak said the school will hold special events for both buildings in which members of the community can have one final walkthrough of their schools, similar to an event held before Hilltop Elementary School was closed.

Once all three schools are in session, Doak said the roads will be very busy with buses and parents dropping off students while new school construction occurs.

“Drive safe and be vigilant of kids biking, walking or taking the bus to school,” Doak said. “We’re wrapping up the summer, sports teams are getting back into action, and it’s the start of a new school year with new students and new experiences.”

Just when we thought we were out of the woods with kitten season, it has hit full force.  The past few days have been difficult answering the phone and hearing the stories of why people have litters of kittens they need to surrender.
Campaign Corner END_OF_DOCUMENT_TOKEN_TO_BE_REPLACED