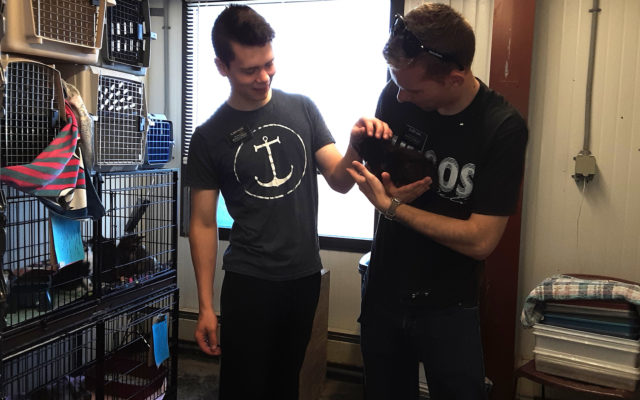 Melissa Lizotte • August 19, 2019
For Henry Dahl and Justin Hatch, missionaries for the Church of Jesus Christ of Latter-day Saints, spending time in central Aroostook County has meant reaching out to people and lending a few helping hands for those who need it most.

PRESQUE ISLE, Maine — For Henry Dahl and Justin Hatch, missionaries for the Church of Jesus Christ of Latter-day Saints, spending time in central Aroostook County has meant reaching out to people and lending a few helping hands for those who need it most.

As part of their service work, both young men have lived in the Presque Isle area for several months now and dedicated most of their time to volunteering for residents and local nonprofit organizations.

Elder Henry Dahl, 19, has been in the region since April 2019. He and Elder Justin Hatch, 20, have volunteered at events such as the Central Aroostook Chamber of Commerce’s strawberry shortcake sale, the Presque Isle Elks Club’s Fourth of July celebration, Micmac Farms, the Bread of Life Soup Kitchen in Caribou and the Central Aroostook Humane Society.

The men have also offered their services to people who need help with outdoor maintenance such as gardening, splitting firewood or cutting grass or indoor projects such as painting walls and installing floors.

In the past, they have visited elderly residents of assisted living facilities and helped build beds for homeless shelters.

“I enjoy helping people, especially if they’re in a position where they might not normally ask for help or be able to do something themselves,” Dahl said.

Both Dahl and Hatch are part of a Latter-day Saints church that is based in Montreal, a city in the Canadian province of Quebec, and includes around 230 traveling missionaries.

On average, an individual mission could last from six weeks to six months. Dahl expects to be transferred to another location in early fall while Hatch has been in Aroostook County for 10 weeks and expects to leave in December.

Currently, there are missionaries from the Montreal church in the Presque Isle and Houlton areas. This is the first time that Dahl and Hatch, who are originally from Meridian, Ohio, and Calgary, Alberta in Canada, respectively, have visited Aroostook County.

“Overall, our experiences here have been pretty positive,” Dahl said. “It’s fun to get to know people and help them out along the way.”

On Thursday, Aug. 15, Dahl and Hatch began their first day of volunteering at the Central Aroostook Humane Society, located on 24 Cross St. in Presque Isle. They started off a fun-filled day with cleaning dog and cat kennels and having a visit with the shelter’s furry friends, including a litter of kittens that will soon be ready for adoption.

Betsy Hallett, executive director of the Central Aroostook Humane Society, said that having Dahl and Hatch as volunteers has greatly helped the shelter.

“We were short of one employee this morning, so if it weren’t for them, we likely would’ve been running behind on chores before opening for the day,” Hallett said, on the morning of Aug. 15. “They’re very nice young men and are willing to do anything to help out.”

Folks who are interested in Dahl’s and Hatch’s volunteer work can contact them directly at (207) 694-2169. Both men said that they encourage young people to volunteer as a way to connect them with their community.

“Anyone can work and earn money for themselves, but when you do something for others just out of the goodness of your heart, you learn more about yourself while getting to know people,” Hatch said.

Only one member of Maine’s congressional delegation had come out in favor of impeaching President Donald Trump ahead of House Speaker Nancy Pelosi’s Tuesday announcement that the Democratic-led House of Representatives would begin an impeachment inquiry.
Pets END_OF_DOCUMENT_TOKEN_TO_BE_REPLACED

Last week, we received a phone call about a cat that was in desperate need of help. The young lady said she found a cat that was very skinny and crying and that there was blood in the snow.
Campaign Corner END_OF_DOCUMENT_TOKEN_TO_BE_REPLACED