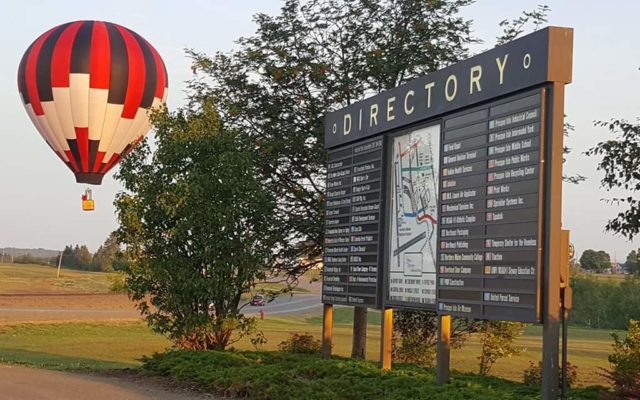 Melissa Lizotte • August 21, 2019
When Derik Smith served as a crew member for Ontario-based hot air balloon pilot Bill Whelan in 2004, he never expected that 15 years later he would be a licensed pilot, flying through the Aroostook skies with his own balloon named Queen of Hearts.

PRESQUE ISLE, Maine — When Derik Smith served as a crew member for Ontario-based hot air balloon pilot Bill Whelan in 2004, he never expected that 15 years later he would be a licensed pilot, flying through the Aroostook skies with his own balloon named Queen of Hearts.

But that’s exactly what happened when Whelan visited Aroostook County as part of the first-ever Isle Festival, which became the Crown of Maine Balloon Festival in 2006.

Smith soon changed his mind and since then has never regretted that first balloon flight.

“After we landed, I was hooked,” he said.

When Whelan came back to the balloon festival one year later, Smith signed up the Presque Isle KFC/Taco Bell franchise, which he owns and operates, as a sponsor. Whelan displayed the restaurant banner on his balloon and invited Smith and his wife, Ellyn, for a Saturday morning flight.

“He says, ‘Ok, Derik, I want you to put your hand up here when I tell you to. This is what makes the fire for the balloon,’” Smith recalled. “‘You’re gonna learn how to fly this balloon.’”

Within a few minutes of Whelan’s impromptu lesson, Smith was flying over a potato field near Presque Isle. Not long after that ride, Smith purchased a flight log book. Every year during the balloon festival he learned more about balloon flying from various pilots until he obtained his official pilot’s license in 2010.

Smith’s newfound hobby also helped change the direction of the balloon festival in northern Maine. In 2005, Smith and his father attended the Atlantic International Balloon Fiesta in Sussex, New Brunswick, and came back with ideas on how to build the festival with a focus on hot air balloons.

Today, Smith still serves on the planning committee for the Crown of Maine Balloon Festival. He offers private rides to folks but does most of his flying during the festival, which has become a special time for members of the hot air balloon community.

In recent years pilots have come from as far away as Florida, North Carolina, New Brunswick, Nova Scotia and Massachusetts to fly across the open fields of northern Maine.

Over the years, Smith’s family have become his main crew members, with Ellyn serving as crew chief and his father Milton, son Erik and daughter Addy also helping out. Smith noted that there is a unique bond that forms among pilots due to everyone’s love of flying.

“With ballooning you become an instant family, partly because of how unique the experiences are,” Smith said. “The best part of flying is the friends you make along the way.”

After Smith earned his pilot’s license, his first balloon was a used balloon that he called “Blues Breaker.” He later purchased his current balloon, “Queen of Hearts,” which he designed himself based on the colors of the KFC logo.

“When we first pulled the balloon out of the storage bag, the red, black and white colors looked like a deck of cards,” Smith said, about the inspiration behind the balloon’s name. “I said, ‘Wow, it’s kind of like the Queen of Hearts,’ and everyone said, ‘That’s the name.’”

One of the biggest challenges for any balloon pilot, Smith noted, is judging how fast the wind speeds are going and whether the winds produce safe flying conditions. Pilots spend most of their day, until the time of a scheduled flight, testing the winds using special weather balloons and updating themselves on current weather conditions. The ideal wind speed is six miles per hour, without any weather disturbances such as rain, thunderstorms and strong wind guests.

But when the wind and weather patterns are just right, flying in a balloon is typically smooth sailing.

“When you fly in an airplane, you can feel the turbulence and you’re always aware that you’re moving,” Smith said. “If you’re in a hot-air balloon and there’s a gentle breeze, you can close your eyes and not even feel a sense of motion. You hear nothing but the sound of the burner.”

Smith will once again be flying “Queen of Hearts” during the Crown of Maine Balloon Festival, Aug. 22-25, at the Northern Maine Fairgrounds in Presque Isle. Though most of his flights are booked, he encourages those interested to consider joining him for high-flying adventures in future years.

“I’ve never seen anyone who didn’t end a ride with a huge smile on their face,” Smith said.

Only one member of Maine’s congressional delegation had come out in favor of impeaching President Donald Trump ahead of House Speaker Nancy Pelosi’s Tuesday announcement that the Democratic-led House of Representatives would begin an impeachment inquiry.
Pets END_OF_DOCUMENT_TOKEN_TO_BE_REPLACED

We think a cat can make for the best pet in the world. To truly love a cat, you must learn to accept them for what they are -- unpredictable and quirky, which is something unique and unlike any other pet.
Campaign Corner END_OF_DOCUMENT_TOKEN_TO_BE_REPLACED