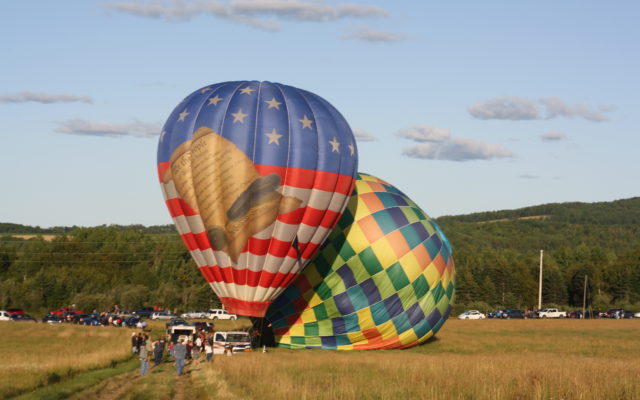 Melissa Lizotte • August 26, 2019
Kenny Shumate of Orlando, Florida, has been a hot air balloon pilot for the past 40 years and often tells people that Aroostook County provides some of the best flying that any balloon enthusiast can ask for.

PRESQUE ISLE, Maine — Kenny Shumate of Orlando, Florida, has been a hot air balloon pilot for the past 40 years and often tells people that Aroostook County provides some of the best flying that any balloon enthusiast can ask for.

“It’s hard to understand just how friendly the people are here unless you visit,” Shumate said, during the second evening of the Crown of Maine Balloon Festival on Friday, Aug. 23. “I have never met one person who does not love balloons or this event.”

Shumate was one of 14 pilots who traveled to Presque Isle for the 16th annual Crown of Maine Balloon Festival, which took place Aug. 22-25 this year. He is one of many pilots who has come back to the popular event numerous times over the past decade.

To see a slideshow of this event, see below.  Some systems may require Adobe Flash.

Among Aroostook County’s many attributes, Shumate noted, is the wide, open fields that stretch out for miles and provide the ideal locations for landing safely. He also gives credit to local landowners for allowing himself and other pilots to land on their properties.

“That’s not something that happens often in other places,” said Shumate, whose rainbow-themed balloon is named “Be Happy.” “I’ve put in over 4,000 hours of flying, but this is one of the best places to fly.”

This year proved to be challenging for pilots and local flying enthusiasts wishing to ride in hot air balloons. Due to strong winds and cloudy skies, the evening flights for last Thursday and Friday were canceled, as was the Saturday morning take-off and Friday evening balloon glow.

Despite the occasional lack of balloons in the sky, many community members came out to enjoy various weekend activities, such as a craft vendor show at The Forum, live music from local performers and Fun on the Field, a family-themed afternoon on Saturday that included a children’s fire muster, carnival games and a walk-through balloon.

“We haven’t been able to see the balloons, but it’s great that they have a walk-in balloon for the kids,” said Elise Perrault of Fort Fairfield, who brought her sons Alex, 8, and Andrew, 4, to Fun on the Field. “That’s not something you can see anywhere else.”

Luckily for community members, the balloons did indeed take off on Saturday evening from various spots in Presque Isle. Most of the 14 balloons launched from an open field on the Reach Road while others soared to the skies from locations near the Caribou Road. 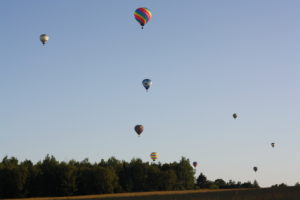 Freedom Flyer (left) and Spellbound Spirit II get ready to launch near the Reach Road in Presque Isle on Saturday, Aug. 24, as part of the third evening of the Crown of Maine Balloon Festival. (Melissa Lizotte image)

As the night grew dark, the pilots gathered at the Northern Maine Fairgrounds for the much anticipated balloon glow, which drew excited shouts from folks of all ages.

The festival also served as a place for returning pilots to catch up with one another and bond over their shared love of flying through the vast Aroostook skies.

“Whenever I come back here, it’s like I’m coming home,” said Marian Deeney of Tallahassee, Florida. “All of us here are like a giant family.”

Deeney has flown her balloon “Hemisphere Dancer” in the Crown of Maine Balloon Festival for the past five years. She has been a balloon pilot since 1993 but considers coming to Aroostook County to be one of her favorite more recent traditions.

Aside from having expansive views of potato fields, rivers and lakes and surrounding communities, the Presque Isle area has also been a place where Deeney and her passengers have spotted deer and moose after landing. Deeney has loved flying in Aroostook County so much that she has even come back to give rides in the winter.

“When I fly in Florida there usually isn’t space that is this wide open,” Deeney said. “It’s beautiful up here and we always have a lot of fun.”

Only one member of Maine’s congressional delegation had come out in favor of impeaching President Donald Trump ahead of House Speaker Nancy Pelosi’s Tuesday announcement that the Democratic-led House of Representatives would begin an impeachment inquiry.
Pets END_OF_DOCUMENT_TOKEN_TO_BE_REPLACED

We think a cat can make for the best pet in the world. To truly love a cat, you must learn to accept them for what they are -- unpredictable and quirky, which is something unique and unlike any other pet.
Campaign Corner END_OF_DOCUMENT_TOKEN_TO_BE_REPLACED