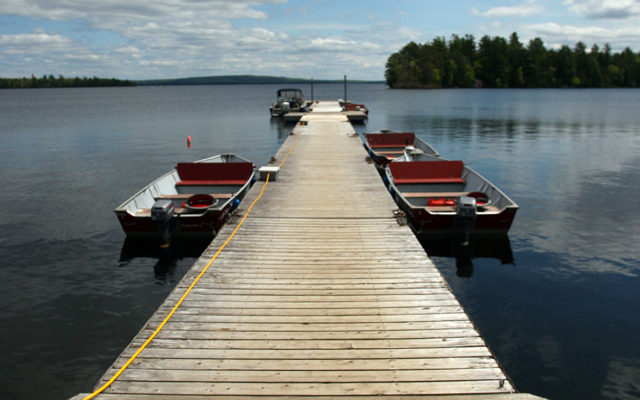 Jen Lynds • August 26, 2019
Residents from Maine and Canada will gather at the East Grand High School in Danforth on Wednesday to hear information and discuss a controversial proposal by a Baileyville pulp mill to abandon a dam it owns.

DANFORTH, Maine — Residents from Maine and Canada will gather at the East Grand High School in Danforth on Wednesday to hear information and discuss a controversial proposal by a Baileyville pulp mill to abandon a dam it owns.

The Federal Energy Regulatory Commission will hold a public meeting at 3:30 p.m. on Aug. 28 at the school to try and answer the question of who should maintain the dam.

Representatives from Woodland Pulp, the U.S. Fish and Wildlife Service and the Maine departments of Environmental Protection and Inland Fisheries and Wildlife are expected to attend the meeting to participate in the panel discussion. The public will have the opportunity to comment after the discussion.

East Grand Lake is a massive waterbody on the international border between Maine and New Brunswick.

More than 100 people attended a rally to save the dam at First Settlers Lodge in Weston earlier this month.

Wayne Smith, who operates the lodge with his wife, Denise, said in a recent interview that allowing Woodland Pulp to surrender its license would be devastating to the local economy.

“I believe it would be devastating for the camp owners, businesses and those who rely on the lake to make their living,” he said. “So essentially, the entire economic area of this region. So much income that is earned by these gas stations, lodges and guide services comes from the lakes.”

Other residents who attended the Aug. 5 meeting agreed. They also expressed concern for the loss of the wealth of natural resources and recreation that the surrounding waterways provide.

In June 2018, the International Joint Commission St. Croix River Watershed Board met in Danforth. Pamela J. Lombard, a hydrologist with the U.S. Geological Survey Maine Water Science Center in Augusta, conducted a study to estimate the unregulated monthly, annual and peak streamflows on the affected waterways. She told the crowd that the report showed “average monthly lake levels would likely be from 1.8 feet to 5.4 feet lower with the gates of the Forest City dam opened than they have been historically.”

There are more than 2,000 seasonal camps and cottages around the East Grand Lake’s edge.

Only one member of Maine’s congressional delegation had come out in favor of impeaching President Donald Trump ahead of House Speaker Nancy Pelosi’s Tuesday announcement that the Democratic-led House of Representatives would begin an impeachment inquiry.
Pets END_OF_DOCUMENT_TOKEN_TO_BE_REPLACED

We think a cat can make for the best pet in the world. To truly love a cat, you must learn to accept them for what they are -- unpredictable and quirky, which is something unique and unlike any other pet.
Campaign Corner END_OF_DOCUMENT_TOKEN_TO_BE_REPLACED