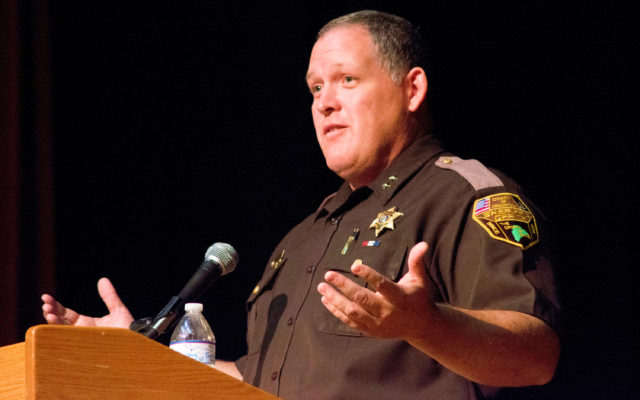 Community discusses importance of substance use recovery during town hall

Chris Bouchard • September 2, 2019
Speakers from Aroostook County and beyond shared harrowing accounts of substance use, as well as the power of recovery, during an Aug. 28 town hall event held at Caribou Performing Arts Center.

CARIBOU, Maine — Speakers from Aroostook County and beyond shared harrowing accounts of substance use, as well as the power of recovery, during an Aug. 28 town hall event held at Caribou Performing Arts Center.

Recovery Aroostook, a grassroots organization formed with the intention of supporting and addressing local addiction issues, hosted the event. Two years ago, the organization was formed following a town hall held at the same Caribou venue.

After a short break, John Holabird shared his story of recovery, Jann Jackson spoke on the power of support for those going through recovery, Roads to Recovery Community Center Manager Stephen Tibbert and County Sheriff Shawn Gillen both emphasized the importance of recovery centers.

Gillen explained how jails, particularly the one in Aroostook County, are becoming overcrowded due to substance use.

“Drug problems typically go hand in hand with mental illness,” he said, which cannot be effectively treated in a jail.

This leads to a situation in which people who have turned to drugs have no place to go but to jail, which leads to overcrowded jails. And while corrections officers work to help inmates who are struggling to recover, Gillen said The County simply does not have the funding or manpower to properly assist everyone who needs help.

“We need treatment facilities,” he said. “In jail, people get into that revolving door, and where do they go when they leave? Sometimes they’re not able to go home or their family has given up on them, and sober living houses are a huge key to addressing this issue. They provide a safe, clean environment where people can get back on track.”

Aroostook County Jail, according to Gillen, is a 117-bed facility. As of that morning, he said 122 inmates were incarcerated there. Corrections officials have to resort to putting mattresses on the floor to accommodate the influx of inmates.

Gillen said he did not always have this mindset. He said thatwhile working in the drug enforcement agency he had thought, “If you’re doing drugs, you go to jail,” adding that he believes “a lot of cops have that mindset.”

Gillen said his outlook changed when he began receiving erratic phone calls from his brother, and later discovered that he had been using methamphetamine.

“He told me that people were following him,” Gillen said. “He would make repeated phone calls, sometimes screaming. Finally, I just said I’m going to go out and see him. I got on a plane and flew out to where he was. I sat in a hotel room with him for a week while he slept for four days straight.”

During his stay, Gillen discovered that brother was addicted to methamphetamine.

While the Aroostook County Jail offers “more programs than any other jail in the state of Maine,” according to Gillen, he said treatment facilities, such as the upcoming recovery house in Caribou, are very much needed in the community.

To put this in perspective, Gillen said he had one-on-one time with an individual at the jail who “needed to go to a facility.” Since he was unable to be admitted, Gillen said he spent four months with the inmate, which cost the jail “$40,000 in overtime.”

Bill Flagg, a member of Recovery Aroostook who also serves as Cary Medical Center communications director later asked Gillen, during a panel discussion, how much it costs to incarcerate an individual at the jail.

For each inmate, Gillen said it costs $90 a day. Flagg then made the point that while guests at a recovery house are responsible for paying $150 each week, the price for incarceration is far higher.

“The money is already in the system, really,” Flagg said. “It’s just a matter of using that funding. I know overcrowding in jails is terrible, and that’s something we need to respond to, but we’re trying to keep people out of the jails to begin with.”

Flagg added that he was glad to see both Gillen and Caribou Police Chief Michael Gahagan show their support during a city council meeting in which recovery houses were discussed, and that he believes a recovery house in Caribou likely will come to fruition due to the support of law enforcement.

Looking ahead, Gahagan said the city’s next step will likely be a safe needle exchange, in which sterilized needles are provided to individuals who are injecting substances. The intention behind needle exchange programs is that they will not only prevent any infections related to using an unclean or used needle, but they also treat those dependent on substances with respect.

Ideally, this will foster a relationship in which people using substances will become more comfortable seeking recovery assistance.

“When individuals are using the same needle six or seven times,” Gahagan said, “they’re going to get infected. And when they take the needle and drop it on the ground, someone else is going to get infected. So if we can take them in, and offer them counseling, that works. It may not be the first time, or the second, but eventually it will work.

He said Caribou Police Department takes in about 55 pounds of needles each week.

“It’s better that we take it in than someone on a playground,” Gahagan added.

Manages, a family medicine physician based in Van Buren, also spoke about the benefits of medication assisted treatment (MAT), and said she has been providing this service with the Aroostook Mental Health Center for the past eight years.

Manages said there are about 12 unique models of MAT, and discussed a couple in detail with guests.

The access center model, she said, gives any individuals struggling with substances an opportunity to call and set up a meeting with a counselor.

“After they call the access center,” she said, “they’re forwarded toward a substance abuse counselor. Then the process starts and they will eventually see me to get an induction, which is a term we use when patients are getting initiated on Suboxone.”

Suboxone is a medication that includes both buprenorphine and naloxone. When used in addition to counseling, it is designed to eliminate opiate cravings.

Another program, the Opioid Health Home, offers a team-oriented “evidence-based approach where we see the patient as a whole,” according to Manages.

“They have a substance abuse counselor, peer coach support, a case manager, a nurse, and I’m involved with the medication part,” she said.

Another service, Women and Children, offers pregnant mothers assistance with substances via a “comprehensive approach.”

“They have a nurse,” said Manages, “and they also have the OB provider as well as the Suboxone medicine provider. After these moms deliver, they’re stabilized at Women and Children and subsequently transferred back to AMHC for continued care.”

Another up and coming program will allow emergency room doctors to take care of patients dealing with withdrawal symptoms by stabilizing them and transferring them to a community program in which they can receive further assistance.

Before the meeting’s conclusion, guests were encouraged to attend an upcoming Caribou City Council meeting at 6 p.m. Monday, Sept. 9, to show their support for a planned recovery house on Hammond Street.

Only one member of Maine’s congressional delegation had come out in favor of impeaching President Donald Trump ahead of House Speaker Nancy Pelosi’s Tuesday announcement that the Democratic-led House of Representatives would begin an impeachment inquiry.
Pets END_OF_DOCUMENT_TOKEN_TO_BE_REPLACED

We think a cat can make for the best pet in the world. To truly love a cat, you must learn to accept them for what they are -- unpredictable and quirky, which is something unique and unlike any other pet.
Campaign Corner END_OF_DOCUMENT_TOKEN_TO_BE_REPLACED