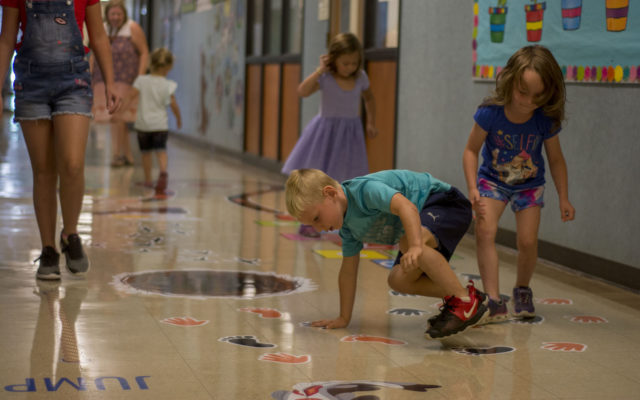 Chris Bouchard • September 2, 2019
As Limestone Community School gears up for its first day on its own without a school district, it has a special offering to students that is above and beyond regular classes.

LIMESTONE, Maine — As Limestone Community School gears up for its first day on its own without a school district, it has a special offering to students that is above and beyond regular classes. The school has a new sensory room and sensory walk meant to help students focus and maintain a calm attitude, particularly learners with conditions such as ADHD and autism.

Limestone’s PreK-8 school is now a town-owned facility following its withdrawal from RSU 39 (a school unit now consisting of Caribou and Stockholm). While the withdrawal won’t lead to any significant programming changes, school officials and community volunteers are working hard to rejuvenate the building. 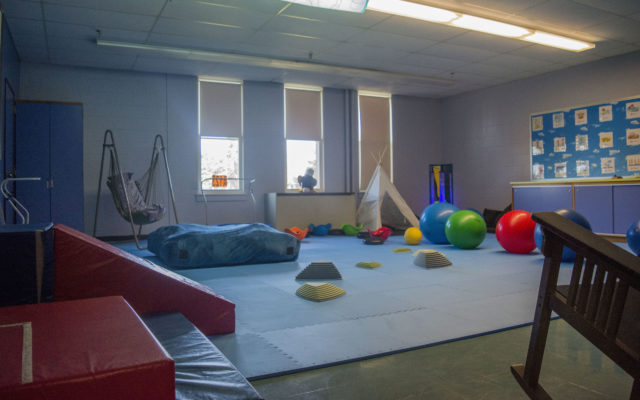 Limestone Community School’s new sensory room is designed to help students calm down and focus, and is the result of three years of work from a group of about five school officials. (Chris Bouchard)

The school’s new sensory room and sensory walk will give students an opportunity to release energy and calm themselves prior to, or during, classes, according to Limestone Community School Principal Ben Lothrop.

Kindergarten teacher Libby Durepo said the sensory walk concept came about through discussions on a subcommittee dedicated to “rejuvenating the school.” According to Durepo, committee member Lianne Lapierre noted that she had seen online videos of schools successfully implementing a sensory walk and made the suggestion for Limestone Community School.

Lapierre’s husband, Joey Lapierre, owns local business Blvd Graphix, and Durepo said they worked together to create a design that would work in one of the school’s busy hallways. 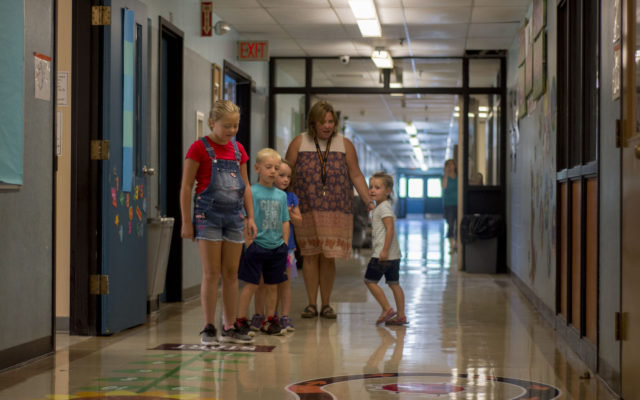 A small group of kids try out the new sensory walk at Limestone Community School on August 28, less than a week before the first day of the new school year.. (Chris Bouchard)

“It’s not just something that looks pretty,” said Durepo. “There are functional uses for a sensory walk, and in designing this we wanted to help students calm down in the hallway as well as with their fine and visual motor perception.”

The committee brainstormed numerous ideas, pitched everything to Lapierre, and from there Durepo said, “he ran with it.”

The entire project, according to Durepo, was completed at no cost to the school.

“He has over 30 hours invested into the design, printing, laminating, and cutting of the floor,” said Durepo. “It’s pretty special that he was able to take that time and donate this to our school.”

The sensory walk helps with spatial awareness and Durepo said it also gives students a chance to slow their breathing, calm themselves, and self-regulate.

“With a sensory walk, they’re crossing both hemispheres of the brain,” she said, “so we call this the brain gym. It helps students get their brain stimulated and ready to work, and it also helps those with ADHD.”

Durepo said that occupational therapists at the school could use the walk for therapy sessions, adding that she plans on taking classes out on the walk “prior to any writing or reading workshops.”

“I know I will be using this for my daily routines,” she said, “and I think that other teachers will incorporate it too.”

The sensory room, like the walk, will help students release energy while also providing a comfortable and calming space intended to reduce stress.

Jocelyn Dillon, who teaches seventh and eighth grade, said the room’s concept came about three years ago, when her son was diagnosed with Asperger’s Syndrome.

Dillon and Limestone School Board Chairwoman Kathie Beaulieu and other school officials began discussing the addition of a room in which students can “have their sensory needs met.”

“It’s a safe place,” said Dillon. “It doesn’t disclude them from anything, and it doesn’t make them feel like they’re in trouble. They can come in and get their aggression out, or they can come in just to calm down. It helps when their brain functions are met and their left and right brains are working together.”

For example, Dillon said there is a student having anxiety about an upcoming test, the student can visit the sensory room, jump on a crash pad, throw a ball against the wall, and take some time to calm down.

Every detail of the room, from the soft lights and the light blue color scheme to the calming music and trampoline, were a result of about five school officials adding suggestions throughout the past three years.

“Every time we saw something that could fit, we’d say ‘Oh that would be great,’” Dillon said. “We would just collaborate with ideas, and buy products on Amazon if we saw something that would fit. We chose blue because it’s very calming, and we covered the lights because it creates a soft environment where the kids don’t get too overstimulated. We also have a soft and hard floor, and some balls that have different textures along with soft blankets and pillows.”

The result is a room where students can go to either to calm down or to release energy and regain their ability to focus in the classroom.

Beaulieu said she was proud of all the work put in by school officials, community members, and Blvd Graphix.

The principal reiterated this sentiment, adding, “Our students at Limestone Community School are incredibly fortunate.” Lothrop said the sensory room and sensory walk will ideally help all students attending during the upcoming school year.

“We’re trying to get the students ready to learn,” Lothrop said. “It certainly makes the school look great, and the kids are going to love it. We’ve also got our school board chair working on a mural, our art teacher has been painting the upstairs bathrooms, and another school board member is coming in to work on a bulletin board. This really has been a community effort, not only school board members, but parents and people in the community.”

Both Lothrop and Beaulieu said they are proud of the work done leading up to the new year.

“The sensory room was just one of the items we dreamed up,” Beaulieu said, “and now it’s coming true because of hard work and determination by a lot of people here at the school. We’re excited for the new school year. There has been a lot of work put into making it a great year already; everyone’s dedicated and looking forward to it.”