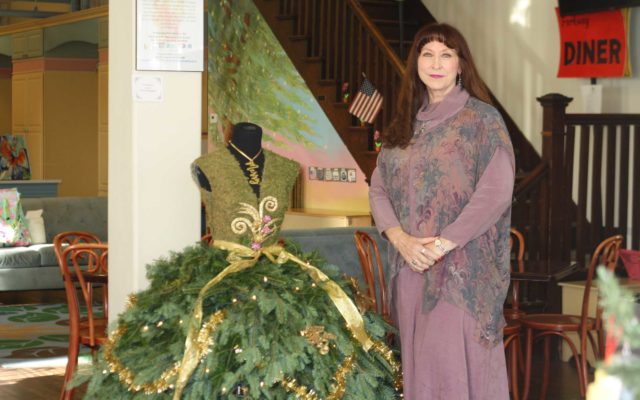 Melissa Lizotte • September 10, 2019
The Christmas season came several months early to Wintergreen Arts Center this year, thanks to an exhibit of approximately 50 Victorian era decorations from Kim Smith that opened on Friday, Sept. 6.

PRESQUE ISLE, Maine — The Christmas season came several months early to Wintergreen Arts Center this year, thanks to an exhibit of approximately 50 Victorian era decorations from Kim Smith that opened on Friday, Sept. 6.

Smith is the resource development and public information officer for the city of Presque Isle, a member of the Presque Isle Historical Society and a longtime enthusiast for studying the Victorian era, which lasted from 1837 to 1901 during the time that Queen Victoria ruled England.

Among the decorations Smith created for the Wintergreen exhibit are a gown made from evergreen boughs, woodburnings, a doily wreath, cornucopias made from lace and sheets of Christmas carol music, a pine cone tree and shadow boxes that contain a tree made from sheet music and an angel created with antique button pins.

“Almost all of the Christmas traditions we observe today come from the Victorian era, from the tree itself to Christmas cards and caroling to decorating and lighting the tree and placing decorations in store windows,” Smith said.

Every year Smith begins making Victorian decorations in July in order to have a full stock ready for the Victorian Christmas at the Estey House tour the historical society holds in December. Many of the projects take her hours to complete, including the evergreen gown, which was a nearly four-hour task on its own.

One Victorian tradition that has German roots is scherenschnitte, also known as paper cutting. Smith displayed many of her own paper cut art projects that included paper in the shapes of angels and Christmas trees.

She noted that Danish author Hans Christian Andersen, most famous for children’s fairy tales such as “The Little Mermaid” and “The Ugly Duckling,” was a master paper cutter and often showcased his art while reading stories to children.

“Anderson would create a paper art piece while reading and then give the artwork to a child in the audience,” Smith said.

For her exhibit, Smith filled a small Christmas tree with various types of ornaments that resemble Victorian era decorations, such as snowflakes made from sheets of Christmas music notes, walnuts, holiday-themed shapes made from beeswax and “snowflake ladies.”

Smith explained that in Victorian days parents would place tiny handmade drawings inside the walnut shells. The children would pick a walnut from the tree on Christmas morning, crack it open and then learn their “fortune” for the year from the drawing, much like a fortune cookie.

Lorie Bonville-Smith of New Brunswick, a Presque Isle native and longtime friend of Smith’s, attended the opening of Smith’s exhibit on Friday and said she enjoyed all the Victorian decorations, especially the evergreen gown.

“People were very creative back then,” Bonville-Smith said, about the Victorian era. “The decorations remind me of when my kids were young and they made homemade Christmas decorations.”

Despite Christmas being months away, Smith hopes that people come to exhibit and feel the magic that the holiday season has to offer.

“For some of us, Christmas might not seem as magical once we become adults,” Smith said. “But it’s still my favorite time of year, so I hope the decorations give people that same spirit and joy of the season.”

A few years back the Ark was gifted with something that we never dreamed possible. It is a gift that left us speechless and opened a whole new door for us.
Campaign Corner END_OF_DOCUMENT_TOKEN_TO_BE_REPLACED