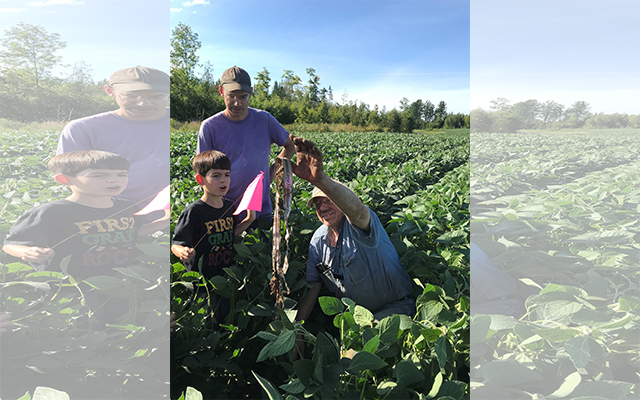 Anthony Brino • September 10, 2019
The farmers and gardeners involved in the Southern Aroostook Soil and Water Conservation District’s unusual soil health experiment have unearthed their test subjects: the remains of cotton underwear they buried earlier this summer.

HOULTON, Maine — The farmers and gardeners involved in the Southern Aroostook Soil and Water Conservation District’s unusual soil health experiment have unearthed their test subjects: the remains of cotton underwear they buried earlier this summer.

About a dozen farmers and gardeners around Aroostook County participated in the project,  burying underwear to see how much of it was left over after two months of soil life.

“The idea is that the more alive your soil, the more the undies will decompose,” said Angela Wotton, district manager at Southern Aroostook Soil and Water Conservation District. “It’s sort of a fun experiment. It’s a good visual for soil health.”

In early September, they began digging them up and found quite a bit of the cotton had decomposed, and mostly the elastic bands remained.

“I have the tattered underwear spread out on cardboard here at the office and am going to have my board vote on the mos -decomposed at next Wednesday’s board meeting,” Wotton said.

Agriculture organizations around North America have adopted the “Soil Your Undies” demonstration campaign as a way to get farmers and the general public thinking about soil health.

Wotton said that she and others involved in the experiment “were surprised at how fast the underwear decomposed” over the course of less than three months.

“It’s been a fun way to get people outside of the farming community talking not only about the experiment but the larger picture of thinking about soil as a living ecosystem.”

Maine is more than eight months into Medicaid expansion under the federal Affordable Care Act and trends around who is enrolling and where they live are starting to emerge, bucking some expectations and pointing out access challenges.
Pets END_OF_DOCUMENT_TOKEN_TO_BE_REPLACED