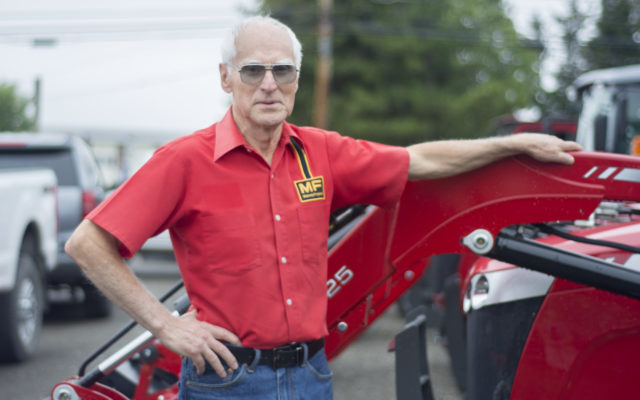 Chris Bouchard • September 11, 2019
Harold Cote, 77, of Connor Township was born in a family of farmers, and from a young age he was drawn to all aspects of the trade.

Harold Cote, 77, of Connor Township was born in a family of farmers, and from a young age he was drawn to all aspects of the trade. This passion for farming led him down the path of working as a farm equipment mechanic for 60 years, assisting countless County farmers with their tractors and equipment since 1959.

As a young boy, Cote said he loved to mess around with equipment and try to build his own engines.

“My mom used to say that I would be a mechanic someday,” he recalled, “and then I was.”

At just 6 years old, Cote learned how to drive a tractor. At 12, he was picking potatoes at his family’s farm in Connor. He would also milk cows before and after school.

He attended a small school on the top of a hill in the small township, which transitioned into a new school when he entered sixth grade. One of the major changes, Cote noted, was that the new school featured indoor toilets as opposed to the old building’s outhouses. While in the new building, he and some classmates would also load up the woodstove during the winter months.

After school, Cote helped out on the farm, and eventually moved out on his own and began working at Belanger’s Farm Machinery on Sweden Street in Caribou at just 17 years old. He stayed on for 60 years as the business changed owners and names, from Belanger’s to Grassland Equipment, to Crown Equipment, and most recently to Beauregard Equipment.

Cote started out as a technician, and at 24 was promoted to service manager, a position he kept until he was 65 years old, at which point he voluntarily stepped down and chose to continue as a technician throughout the remainder of his career.

He married his wife Janice Cote in 1962 and six years later the two of them built a house in Connor together. Though Cote often went to work early in the morning and came home late at night, he and his wife still set aside time to work on the home.

They have two children. One now lives in Brewer, and his youngest son now lives in Alaska after serving in the military.

The busiest periods of work for Cote were during spring and also during the fall harvest break.

“As soon as the snow would go,” he said, “farmers would need to start their planters. So it was very busy until hay season, and then we worked on the balers until harvest, which was even more busy than the spring planting season.”

Cote would often work six nights a week, adding that the business would sell between 75 and 80 tractors each year.

Due to the size of most farm equipment, working long hours often meant that Cote would need to drive out to a local farm and fix a tractor or machine on the scene.

“I was always on the road,” he said. “Sometimes we could bring equipment back here, but it was always a lot of labor.”

Just recently, a group of Cote’s current and former co-workers, along with friends and family, surprised him with a retirement party on Aug. 29,his final day on the job after 60 years of service.

Even though he knew his retirement was coming, he said that it was “quite a shock” when the day actually came.

“It’s very hard,” he said of his retirement. “You’re so used to doing a certain thing, traveling every day and coming in in the morning. Everyone here is just like family to me. We say ‘good morning’ to each other every day. But it’s happening today, right now. Sixty years is a long time, and all of a sudden to just stop like this is a shock.”

Once he retires, however, Cote has no plans of slowing down, adding he has several projects at home that he would like to tackle at his own pace.

“I’ve enjoyed working with all the farmers, the boys at the shop, and all the employers I’ve had over the years,” he concluded.

Maine is more than eight months into Medicaid expansion under the federal Affordable Care Act and trends around who is enrolling and where they live are starting to emerge, bucking some expectations and pointing out access challenges.
Pets END_OF_DOCUMENT_TOKEN_TO_BE_REPLACED