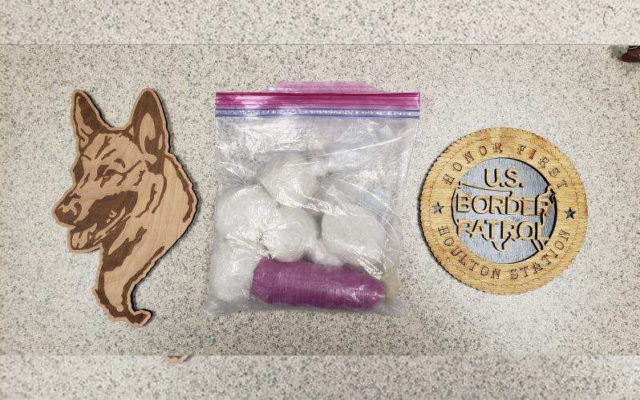 Joseph Cyr • September 11, 2019
Border Patrol agents have identified a white powder as fentanyl that was found in an abandoned vehicle on Interstate 95 during a border checkpoint in August.

HOULTON, Maine — Border Patrol agents have identified a white powder as fentanyl that was found in an abandoned vehicle on Interstate 95 during a border checkpoint in August.

Agents were conducting a border checkpoint near Sherman on Aug. 12, when they noticed an abandoned Ford Mustang on the side of the road. Upon investigation, agents found $29,000 in cash inside the vehicle, along with 146 grams of methamphetamine and about 90 grams of white powder.

“Because there is an ongoing investigation, we cannot provide a comment on who the driver may have been,” said Mark Philips, public affairs liaison for the Houlton Border Sector.

The U.S. Border Patrol seized the cash, narcotics and vehicle. Border Patrol agents have not released the name of the registered owner of the vehicle.

“There were 354 drug fatalities in Maine last year,” said Jason Owens, chief patrol agent of the Border Patrol in Maine. “Combatting this drug epidemic requires every agency to do its part. In this case, we were able to interrupt the illicit movement of a dangerous drug and take it off the streets before it could do more harm.”

Fentanyl is a synthetic opioid that is 80-100 times stronger than morphine, according to the U.S. Drug Enforcement Agency’s website. Pharmaceutical fentanyl was developed for pain management treatment of cancer patients, applied in a patch on the skin. Because of its powerful opioid properties, Fentanyl is also diverted for abuse. Fentanyl is added to heroin to increase its potency, or be disguised as highly potent heroin.

“If handled improperly, fentanyl can be deadly, especially to law enforcement and first responders,” said Chief Owens. “As an agency, we have taken steps to ensure our field agents are aware of the hazards associated with synthetic opioids and are equipped to handle them safely.”

The incident remains under investigation.

Maine is more than eight months into Medicaid expansion under the federal Affordable Care Act and trends around who is enrolling and where they live are starting to emerge, bucking some expectations and pointing out access challenges.
Pets END_OF_DOCUMENT_TOKEN_TO_BE_REPLACED