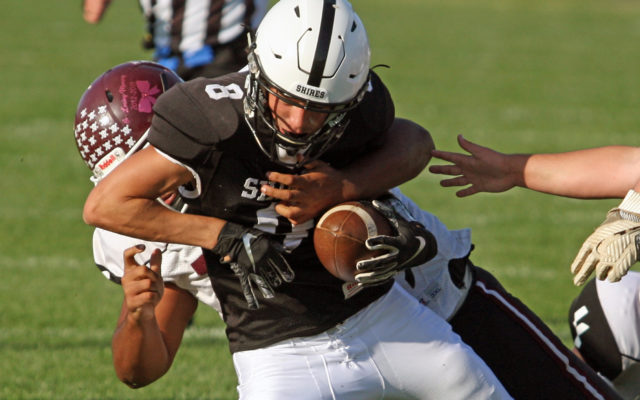 Joseph Cyr • September 11, 2019
Playing two days later than originally scheduled, the Houlton football squad had no trouble getting things going both offensively and defensively in its season-opening game against Mt. View.

THORNDIKE, Maine — Playing two days later than originally scheduled, the Houlton football squad had no trouble getting things going both offensively and defensively in its season-opening game against Mt. View.

Originally scheduled for Saturday, Houlton’s contest with Mt. View was moved to Monday due to the high winds and rains associated with hurricane Dorian.

The change of dates did little to slow down the Shires as Houlton scored early and often against the host Mustangs, rolling to a 40-0 victory Monday afternoon. That win comes on the heels of a 67-0 pounding of Washington Academy in the team’s lone preseason contest.

“Yesterday was the most complete game I think we have ever played,” said long-time Houlton coach Brian Reynolds of Monday’s season-opener. “We controlled the line of scrimmage on both sides of the ball. We had big plays on offense and a stingy defense that led us to victory. Special teams was also a bright spot for us.”

Senior Noah Reynolds paced the Shires with 110 yards rushing with two touchdowns. Sophomore Caleb Solomon grabbed five receptions for 111 yards and three touchdowns, while senior Will Belyea completed five of 13 passes for 111 yards and three scores. Collectively, Houlton had 38 rushing attempts for 187 yards.
“It all started in the trenches though as our offensive and defensive lines dominated,” coach Reynolds said. “I want to give a shout out to our Black Shirts who helped us prepare all week and were so involved during the game. They played well on special teams and did a great job calling out the formations and play for Mt. View when we were on defense.”

Reynolds is on his 14th year coaching football for the Shires. The team has been a school-sanctioned program for the past eight seasons.

“We have high expectations for this team,” the coach said. “We graduated three seniors, but have most all of our starters back on both sides of the ball. We have 12 seniors and many of them have been playing football since third and fourth grade. Our maturity and experience should bode well for us.”

A season ago, Houlton finished 2-6 and missed out on the postseason. Coach Reynolds said that while he was optimistic the team would notch a few more victories, he was focusing on a different aspect of the game.

“We are really focusing on sportsmanship this year with the goal being to receive less penalties,” he said. “We have some areas of concern, talking less on the field and with the officials and we hope that will get us to where we want to be.”

A new wrinkle for the Shires this year has been sophomore Chris Caswell’s impressive kicking. “Chris has a very strong leg and can kick 40-yard field goals,” the coach said.

Halfway Home Pet Rescue in Caribou has partnered with the Houlton Humane Society shelter for a cat spay and neuter clinic on Saturday, May 30, and Sunday, May 31, in Houlton.
Campaign Corner END_OF_DOCUMENT_TOKEN_TO_BE_REPLACED