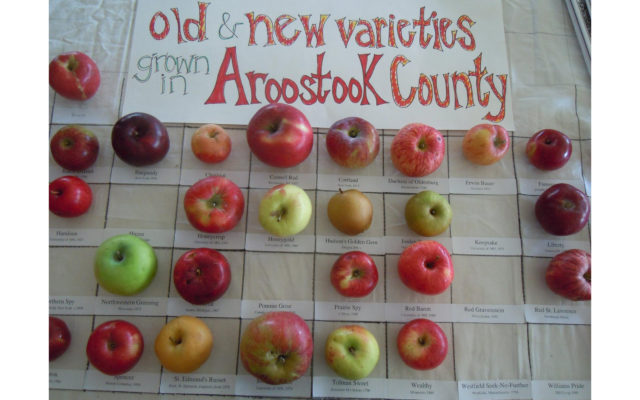 HOULTON, Maine — The Southern Aroostook Soil & Water Conservation District will hold its third Aroostook Apple Day — a gathering of tree fruit growers and lovers — on Saturday, Oct. 5, at the Unitarian Church in Houlton.

It’s the third time the district will host the event, a popular autumn draw for people from around northern Maine, said Angela Wotton, district manager at the Southern Aroostook SWCD.

“It’s something that people look forward to,” Wotton said. “We have a lot of people interested in home orchards and the people on our committee have a lot of experience growing local varieties. Most of these growers have been doing it organically, which adds another level of skill.”

Aroostook County’s many wild apple trees growing along roadsides, fields and woodlands are a testament to the region’s history with the fruit. While The County historically did not have a commercial fruit industry, home orchards were common on every farm and one chance seedling from Castle Hill in the late 1800s — the Dudley Winter apple — for many decades was grown in commercial orchards in New England and Canada.

The northern Penobscot County town of Stacyville is the birthplace of the Stacyville pear — a fruit that has been popularized by several nurseries. The original pear tree is still standing and is estimated to be more than 250 years old.

Wotton said the Southern Aroostook SWCD organized the event to raise the profile of apples and other tree fruit in Aroostook County, and to offer people ideas and resources.

“There are so many old orchards around here, too, and we get a fair amount of calls about renovating old orchards,” Wotton said.

The event, running from 10 a.m. to 3 p.m., will feature apple tastings, variety displays, and presentations and discussions on managing fruit trees, as well as cider pressing for people who want to bring their own apples and vendors selling garlic, fruit trees and fruit.

“It’s a really great opportunity. It’s very informal,” Wotton said. “If you want to come for five minutes or all day, that’s totally fine. The knowledge of the speakers we’re able to get is pretty valuable. It’s a great place to come and talk to others about how to care for fruit.”

Only one member of Maine’s congressional delegation had come out in favor of impeaching President Donald Trump ahead of House Speaker Nancy Pelosi’s Tuesday announcement that the Democratic-led House of Representatives would begin an impeachment inquiry.
Pets END_OF_DOCUMENT_TOKEN_TO_BE_REPLACED

We think a cat can make for the best pet in the world. To truly love a cat, you must learn to accept them for what they are -- unpredictable and quirky, which is something unique and unlike any other pet.
Campaign Corner END_OF_DOCUMENT_TOKEN_TO_BE_REPLACED