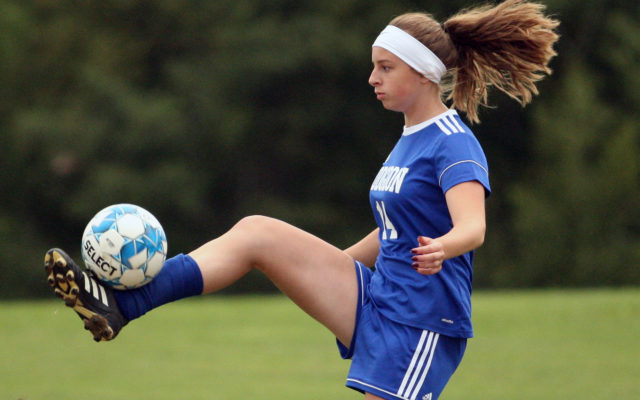 Joseph Cyr • September 17, 2019
The Hodgdon boys and girls soccer teams are enjoying their fair share of success this fall.

HODGDON, Maine — The Hodgdon boys and girls soccer teams are enjoying their fair share of success this fall.

The Hodgdon girls sit at 2-2 on the young season under the guidance of third-year coach Amanda Stubbs, while the Hawk boys are 4-0-1 under the direction of coach Jason Little, also in his third season with the club.

For Stubbs and the Hawk girls, this season is full of high hopes after finishing 4-8-1 last season and missing the playoffs by one spot.

“I have high expectations for this season,” the coach said. “We are returning all of our players from last year and have a lot of talent that should be able to take us deep into the playoffs. We had UMFK come down and put on a soccer clinic for us the first week of practice and we were really able to work on and improve a lot of skills.”

With everyone back for another season, the Hawks have developed strong chemistry on the field.

“We pass the ball really well and we have many options offensively,” the coach said. “We also have an extremely talented goalie in Autumn. This is a very close-knit team and they work hard and want to be successful.”

Stubbs added she plans to stress working on spacing on the field and using the entire field, rather than just small parts of it, during games. Maintaining a solid defensive front and staying in position are other areas she hopes to work on this fall.

The Hodgdon boys have been red-hot to start the season, scoring 30 goals in the first five games, while only allowing eight goals. The coach attributed the team’s quick start to the work put in over the summer.

“Throughout the summer, we had players out on the field often on their own or during our summer soccer time,” coach Little said. “They have all worked incredibly hard so far and we are looking forward to the results. I believe that the UMFK clinic really helped the team understand how to work as more of a cohesive team and to move the ball easier.”

“We definitely have strength in numbers this year,” coach Little said. “We have 23 players right now and had two others that got hurt over the summer and decided not to play. Senior leadership is a big strength of ours this year as they work with the younger players on skills and teamwork. Our guys have worked hard to get to where they are today and have a high level of athleticism. They work very well together on the field passing and moving without the ball.”

A year ago, the Hawks finished 9-4 on the year and were ranked 10th in Class D North, losing to Schenck/Stearns in overtime in the preliminary round. The Hawks lost four seniors from that squad, including one of the team’s top goal scorers (Josh Palmer).

The coach hopes that loss still stings with some of his upperclassmen so they will be hungry to go deeper into the postseason this year. To that end, the team worked extremely hard over the summer with fundamentals.

“We hope to keep moving the ball and working on possession,” he said. “Another area is to put together a full game of soccer and keep our spacing throughout that time.  We’re also hoping to have our younger players get playing time in order to develop.

Halfway Home Pet Rescue in Caribou has partnered with the Houlton Humane Society shelter for a cat spay and neuter clinic on Saturday, May 30, and Sunday, May 31, in Houlton.
Campaign Corner END_OF_DOCUMENT_TOKEN_TO_BE_REPLACED