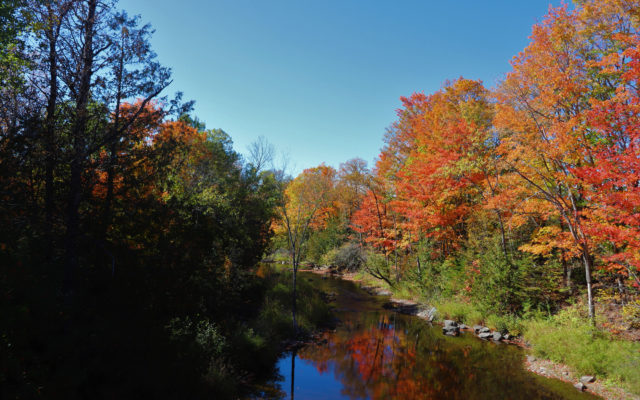 Temperatures were below average in September

Jen Lynds • October 4, 2019
Miriam Turner of Caribou resisted the urge to turn on her pellet stove all week long.

CARIBOU, Maine —Miriam Turner of Caribou resisted the urge to turn on her pellet stove all week long.

But when she got up on Wednesday and felt that all too familiar chill in her house and saw that the temperature outside had still not risen over the 40-degree mark, she broke down and fired up her stove for the first time since she last turned it off in May.

“When I say it like that, it doesn’t seem like my stove has been off all that long,” she said. “And I know it hasn’t. It sure hurts to turn it on because I know it is going to be a long winter and a long heating season now that September is over.”

Temperatures for the month were slightly below the average maximum temperature of 64.8 degrees, according to the National Weather Service in Caribou. They ranged from 0.5 degrees to 1.5 degrees below average across the region as a whole.

The month opened on a cool note with the first widespread frost occurring on the mornings of Sept. 18 and 19 across the north. Many regions experienced lows in the upper 20 degrees to lower 30 degrees. This was followed almost immediately by a period of summer-like warmth Sept. 20-23. A high temperature of 81 degrees was observed in Caribou on Sept. 22.

The cool temperatures resulted in an accelerated onset of fall deciduous tree colors across the region, according to the weather service.

The lowest observed temperature was 31 degrees on Sept. 18.

Rainfall across the area mostly ranged from 70 to 110 percent of average. Caribou received 4.87 inches, which was 1.55 inches above normal. It was the 13th wettest September on record for Caribou. Bangor received 2.81 inches of precipitation, which was 1.02 inches below normal. The precipitation pattern was reversed this summer, when Caribou was drier than normal and Bangor was wetter than normal. The last part of September was much wetter than the first part of the month, according to the weather service.

Turner said on Wednesday that she “was still resisting” the urge to bring her winter clothes down from the attic.

“I absolutely refuse to do that until at least Halloween,” she said Wednesday.

For all it does to refresh us, burn energy and keep us sharp, we all need playtime, dogs and cats included. Sharing playtime with pets has the added benefit of strengthening the bond between us, so we better understand one another.
Campaign Corner END_OF_DOCUMENT_TOKEN_TO_BE_REPLACED