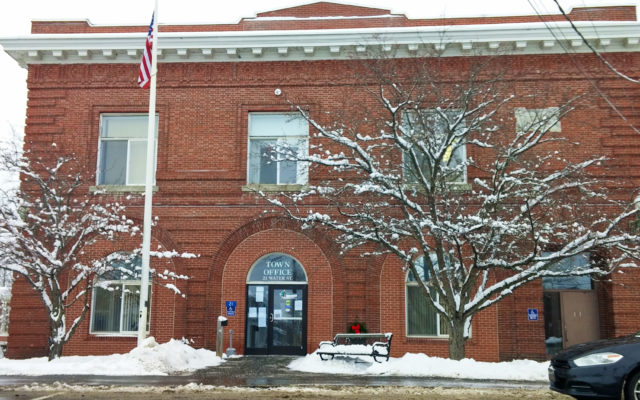 Jen Lynds • October 8, 2019
After lengthy discussion, municipal officials are leaning toward repairing a piece of town equipment in order to use it this coming winter.

HOULTON, Maine — After lengthy discussion, municipal officials are leaning toward repairing a piece of town equipment in order to use it this coming winter.

The decision came during a Town Council meeting Sept. 23, but the council will not officially vote on the matter until after a public hearing at their next meeting on Monday, Oct. 14.

The loader needs approximately $37,500 worth of repairs, including new pumps. It lasted eight years before breaking down. During the Sept. 23 meeting, the town held an introduction and first reading of a plan to transfer the funds from surplus in order to repair the machine.

Chris Stewart, the town’s public works director, approached the council about the Komatsu front end loader currently being used. He said that one of the equipment operators was using it at the town gravel pit when it suddenly lost power. It was sent to Anderson Equipment in Bangor, where they found that both hydraulic travel motors had quit.

He said that the town has kept up on the maintenance of the machine and it has just 6,000 hours of usage, but the department continues to have issues with pumps in the transmission. The loader runs year round.

“We are getting into September, so I need to know where to go with this,” he told the council. “I believe that it is a good machine and we haven’t had many issues with it. Even broken down, it still has some value. I would estimate its value at $75,000 to $90,000 if we were to trade it in just as is.”

Councilor Bill McCluskey asked if it was common for the machine to break down after such a short amount of usage.

Stewart said that mechanics from Anderson Equipment in Bangor told him that it was “fairly common” for the pumps to quit after “five or six thousand hours.”

The council at first leaned toward selling the item. Councilor Chris Robinson said that he was in favor of fixing it, and the majority of the other councilors leaned in that direction.

The council will make a final decision during the upcoming meeting.

Only one member of Maine’s congressional delegation had come out in favor of impeaching President Donald Trump ahead of House Speaker Nancy Pelosi’s Tuesday announcement that the Democratic-led House of Representatives would begin an impeachment inquiry.
Pets END_OF_DOCUMENT_TOKEN_TO_BE_REPLACED

We think a cat can make for the best pet in the world. To truly love a cat, you must learn to accept them for what they are -- unpredictable and quirky, which is something unique and unlike any other pet.
Campaign Corner END_OF_DOCUMENT_TOKEN_TO_BE_REPLACED