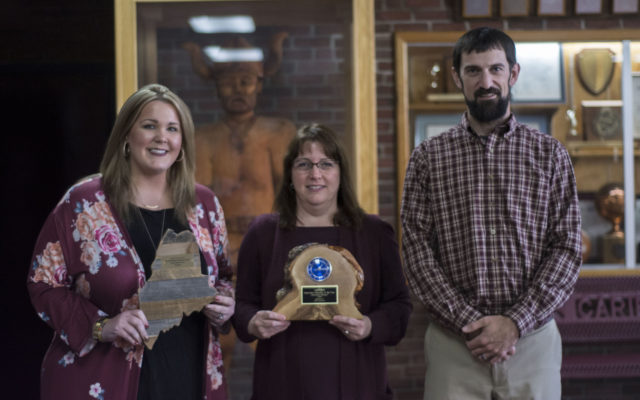 All three teachers said they were humbled and honored to receive these accolades, and Waldemarson said she found out during the Sept. 19 awards ceremony that about seven of her students had nominated her for the award.

“Sometimes I still don’t believe it,” Waldemarson said upon winning the award. “I was blown away when they first called me because I feel that, since I’m so new to the education field, that I don’t deserve the honor of being put in such a good category. I have so many colleagues that I admire who put 20 to 30 years into education, and I feel like I have so much to learn.”

She said it felt “kind of surreal” to discover that her students felt that she had made such an impact on their lives.

“It leaves me speechless,” said Waldemarson. “I don’t know what to say.”

Waldemarson, a Texas native who obtained a law degree in Florida, said she moved to Maine to be closer to her parents, which is where she landed the job as Caribou’s JMG Specialist, a position she never expected to hold.

“I never thought I’d be working out of the courtroom,” she said, adding that one similarity between the two positions is that they both involve advocacy.

“I help my students open bank accounts,” she said. “I prepare them for job interviews, and I empower them to follow their dreams rather than settling for what they think other people would want them to do.”

Goodwin, who has nearly 15 years in education, is beginning his second year as a math teacher at Caribou High School. Prior to this, he taught at Washburn District High School for 11 years in addition to participating in numerous extracurricular activities in Washburn such as coaching baseball, volleyball and soccer as well as advising the National Honor Society and Student Council.

Goodwin’s nomination as Mentor of the Year, he said, comes from his unique approach to teaching mathematics.

“I try to create relationships with the kids and teach them something aside from math,” he said. “At some point in your life you probably had to learn the quadratic formula, and you probably aren’t using it now. I’m right up front with the kids about that, but explain that math is more about the idea that you are governed by a set of rules, and you need to know these rules and how to apply them to solve problems. That can be applied no matter what you’re doing in life.”

To do this, he said he works to distill complex formulas and equations down to “very basic, common ideas that were taught in elementary school.” Goodwin said that no matter how complex a situation may initially appear, it can be broken down into simple, manageable parts.

Goodwin said he was immensely honored to receive the award, and that his goal is to have the same impact on students that his mentors, former teachers and colleagues have had on him.

“Without those people,” he said. “I wouldn’t be where I am today. So if I can be that person for even one kid, that’s my goal.”

With 14 years of experience as an educator at RSU 39 (Caribou and Stockholm), her decision to move toward a paperless classroom was a significant factor in her receiving the “Innovative Educator of the Year” award.

Sleeper made this decision as a seventh-grade teacher in an effort to “acclimate students to technology” by using it in the classroom every day.

“That’s the future for their education,” she said. “They will all be using some sort of device to submit their work, and it will go well beyond word processing.”

Sleeper also draws from her experience at UMPI, noting that the university uses an online platform called “Blackboard” for communication between students and teachers, and also for students to obtain relevant information such as the course syllabus. By introducing students to this platform in high school, she said they will be far more prepared upon entering college.

“I’m pretty much teaching a paperless classroom,” she said, “and it’s great. If students are missing school, they can [go online and] see what happened. Their handouts are right there, so they don’t have to come see me in the morning and ask about what they missed.”

With today’s students being busy with jobs and extracurricular activities, and seniors and juniors scheduling college visits throughout the year, Sleeper said the incorporation of an online platform with her class has helped immensely.

Sleeper said she was honored to receive the award, but also surprised.

“It’s completely out of my comfort zone,” she said. “You work collaboratively with everyone when you’re a teacher, so it’s hard to be recognized as an individual. I’m always bouncing ideas off people and getting feedback from my students. I’m innovative because of the people around me.”

For all it does to refresh us, burn energy and keep us sharp, we all need playtime, dogs and cats included. Sharing playtime with pets has the added benefit of strengthening the bond between us, so we better understand one another.
Campaign Corner END_OF_DOCUMENT_TOKEN_TO_BE_REPLACED