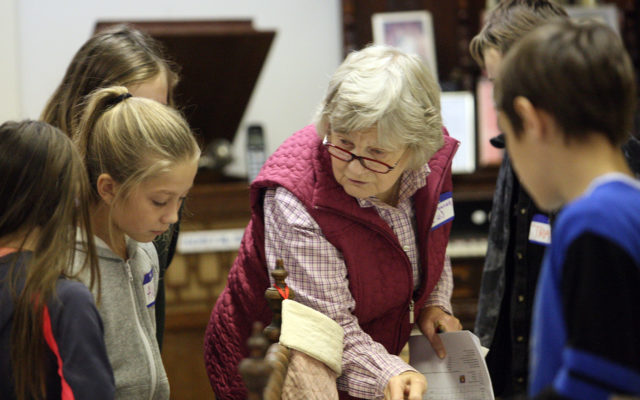 Fifth-graders take a trip through yesteryear

Joseph Cyr • October 10, 2019
Life in the early 1900s was vastly different from the technological era that we live in today. Houlton Southside School fifth-graders learned that lesson first hand Tuesday, Oct. 8, as the class took a field trip to the Southern Aroostook Agricultural Museum in Littleton.

LITTLETON, Maine — Life in the early 1900s was vastly different from the technological era that we live in today. Houlton Southside School fifth-graders learned that lesson first hand Tuesday, Oct. 8, as the class took a field trip to the Southern Aroostook Agricultural Museum in Littleton.

The trip was held in conjunction with the school’s curriculum on colonial times as a way to show students how much things have changed over the years.

“All fifth-grade students in RSU 29 study colonial times,” explained Nancy Wright, a former educator and volunteer at the museum. “As part of that study, the students have to do a technology project, where they get to choose an item (from Colonial times) to do a presentation on. We thought instead of bringing an item to the student to present, why not bring the students to all of the items here at the museum.”

Wright said she was shocked to learn that of the 126 students in the fifth grade at Houlton Southside School, only a handful had ever been to the museum.

Students were divided into more manageable groups for various workshops and tours of the museum. Sessions included a look back at early school life in the “Ross School,” a re-creation of what a classroom looked like in 1919; old-time games of the past, such as rolling a wooden hoop with a stick; and learning how to make a candle and sew a button.

“I liked best that we got to see what schools looked like back in 1919,” said Isabella Dodge, a student at HSS.

“I liked when we got to do the scavenger hunt in the museum, so we saw things like the broom gun they trained with for the war and how they slept on beds with straw, and they had to keep tightening the ropes by hand that held the mattresses,” added classmate Callum Dyer.

Other students preferred the games. “I liked the old games we played outside,” said student Will Baillargeron. “We rolled hoops from barrels across 10 feet with a stick.”

Brodie Merritt said, “I liked the museum because of the old stuff and how much I learned there.”

Also included in the field trip was establishing a theme of preventing “bullying” in the school and how students can help friends who are suffering from this type of abuse.

Halfway Home Pet Rescue in Caribou has partnered with the Houlton Humane Society shelter for a cat spay and neuter clinic on Saturday, May 30, and Sunday, May 31, in Houlton.
Campaign Corner END_OF_DOCUMENT_TOKEN_TO_BE_REPLACED