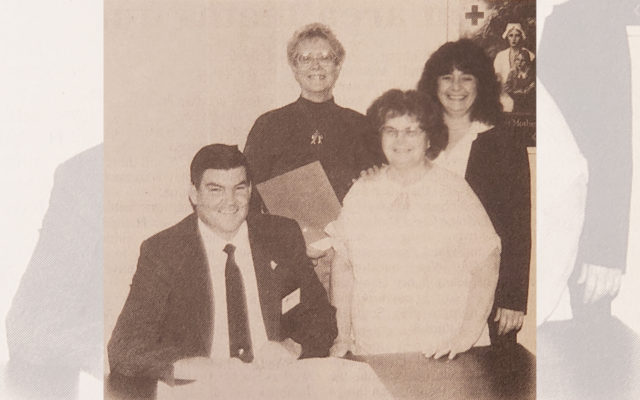 Compiled by Yvonne Tardie, Special to The County • October 15, 2019
Presque Isle was well over the top in the Fourth Liberty Loan drive. With a quota of $244,300, her subscription totalled $151,350, a good showing, creditable to those who subscribed and also creditable to those in charge of the campaign.

Frazier appointed deputy chief of staff — Fred Frazier of this city was appointed deputy chief of staff to help organize VFW posts in Aroostook, it was announced at the Houlton VFW session, which was attended by the Department Commander. Attending from Presque Isle were Mr. and Mrs. Frazier, Edmund Tardy, Mrs. Joseph Gallagher and Mrs. Simon Martin.

State Park rated top scenic spot — Year-old Grafton Notch State Park was high on the list of foliage tours suggested by the State Park & Recreation Commission for the fall of 1969. Located on Route No. 26 between Upton and Newry, this park was developed solely for scenic enhancement, a first in Commission history. Over 2,000 areas were purchased from Brown Paper Company, the rest of the 3,000 acres from private owners. The State Highway Department worked closely with the Park Commission on two sections of road improvement and designs of parking areas.

Local woman given degree — Susan Guyette Kebir, daughter of Mr. and Mrs. Leo Guyette of Presque Isle, received a bachelor of arts degree in French from Southern Methodist University, Dallas, Texas. Named the previous year to the dean’s list for outstanding academic work, Mrs. Kebir was taking graduate work in anthropological linguistics at SMU and also working as a computer programmer. Her husband, Mohammed Kebir, was a doctoral student in electrical engineering.

Quits for babies — Linette Buzza of Presque Isle Girl Scout Troop 81 made and donated quilts for babies in the nursery at Gould Memorial Hospital in Presque Isle. This donation by Buzza was part of her Girl Scout Gold Award project. She also gave quilts to the Temporary Shelter for the Homeless and the Battered Women’s Project. Loring Air Force Brownies and Junior Troop 517 contributed some quilting pieces. Registered Nurse Deborah Lloyd at Gould Memorial Hospital received the donation from Buzza.

In appreciation — Bill Sheehan, an environmental specialist for the Department of Environmental Protection, was presented with a plaque by Rita Rogers from the Francis Malcolm Science Center in appreciation for leading the public bird walk program from 1990-1994. Sheehan was a local bird enthusiast who was involved in research and conducting a bird banding project in the Woodland area. Public bird walks were organized by the science center every fall and spring.

Graduates — The Private Bank, part of Casco Northern, was pleased to announce the graduation of Nancy L. Brewer of Presque Isle from the New England School of Banking’s Trust School at Williams College in Williamstown, Massachusetts. Brewer graduated from the two-year course with honors, and received her certificate in trust after completing a series of courses and projects in tax, fiduciary, and personal trust issues. She joined Casco Northern in 1971 and had served in many areas throughout the bank. Brewer was appointed vice president and trust officer for The Private Bank’s northern division in February 1992.

At the Houlton Humane Society, we take adopting the cats and dogs in our charge very seriously.
Campaign Corner END_OF_DOCUMENT_TOKEN_TO_BE_REPLACED