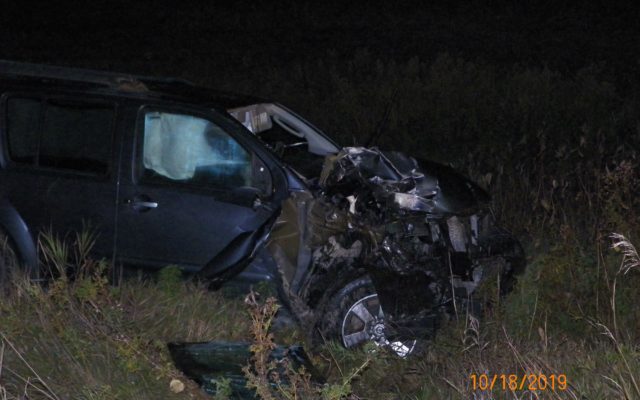 Jessica Potila • October 20, 2019
Nathan Richards, 37, was charged with trafficking methamphetamine after the crash.

LITTLETON, Maine — Police rescued a man and woman who were trapped in a vehicle after a single vehicle crash in Littleton on Friday and ultimately charged the driver with trafficking methamphetamine.

The Aroostook County Sheriff’s Office received a report about 8:45 p.m. that two people were trapped in a 2012 Nissan Pathfinder that had crashed into a utility pole on U.S. Route 1 in Littleton.

Deputy Ryan Johnston responded to the scene and with help from the unidentified person who reported the crash was able to free Presque Isle residents Nathan Richards, 37, and Jessica Cheney, 38, from the Nissan.

Houlton Ambulance transported Richards and Cheney to Houlton Regional Hospital with injuries that were not considered life-threatening, according to Sheriff Shawn Gillen.

Richards, the driver of the vehicle, was medically cleared and then arrested for unlawful trafficking in schedule W drugs after police allegedly located 30 grams of methamphetamine while investigating the crash.

Excessive speed and impairment are believed to be factors in the crash.

York’s Towing removed the Pathfinder from the scene due to disabling damage.

The Maine State Police, Emera Maine and the Littleton and Monticello fire departments assisted at the scene.

Just when we thought we were out of the woods with kitten season, it has hit full force.  The past few days have been difficult answering the phone and hearing the stories of why people have litters of kittens they need to surrender.
Campaign Corner END_OF_DOCUMENT_TOKEN_TO_BE_REPLACED