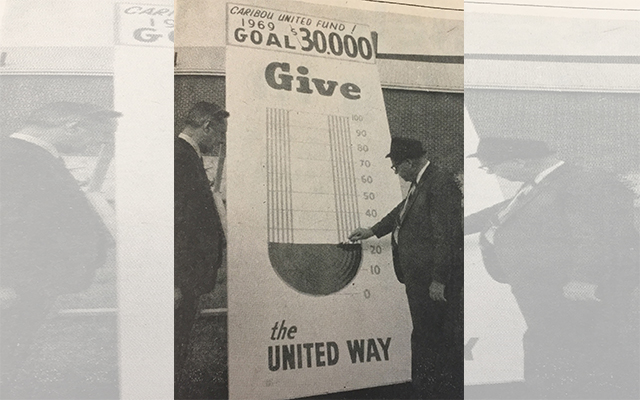 Beth Lacombe, Special to The County • October 22, 2019
115 Years Ago - Oct. 19,1904 Potato picker -- A dispatch from Monticello claims that Warren Brocker has made a new world’s record picking potatoes, having picked 150 barrels in nine and a half hours. This is not equal to the feat performed by a Caribou boy, Frank Bishop, who picked 148 barrels in about seven hours while working for John B. Lyon.

Potato picker — A dispatch from Monticello claims that Warren Brocker has made a new world’s record picking potatoes, having picked 150 barrels in nine and a half hours. This is not equal to the feat performed by a Caribou boy, Frank Bishop, who picked 148 barrels in about seven hours while working for John B. Lyon.

Fire — The saw mill of S.W. Collins & Son at Mud Brook burned on Monday at a loss of $2,000. The railroad bridge was set fire from the burning building, but crews from Van Buren and Stockholm extinguished the blaze before any damage was done.

Barrel prices — There’s quite a difference in the price paid to pickers during the potato digging season this year and a few years back. Farmers have been paying around 10-15 cents a barrel.

Madawaska Road — The first snow flurries of the season arrived Sunday, Oct. 15, though not an amount to show up on the ground to any extent. More snow squalls fell Monday increasing the nastiness of digging operations for those who are not done yet. Ten years ago on the 10th of October a foot of snow fell onto the fields.

New building started on site of old Elite — The gap left on Sweden Street by the Elite restaurant fire will soon be filled by a modern one-story building. Nelson Solman, owner of the new building, said it would be used for a restaurant and bowling alley.

Turkey skeet shoot — The Limestone Lions Club will hold another combined Turkey/Skeet Shoot at Limestone Ski Area on the Grand Falls Road this Sunday, beginning at 10 a.m. They request that contestants furnish their own shotguns and shells for the skeet shoot.

Oran Van Crabbet receiving Saturday — Oran Van Crabbet, the only known horse to win three national show titles, will receive guests at Dow Arabian Farms in Perham Saturday afternoon and evening. Home from his show career, Oran may be visited by all animal lovers at the farm home of his owners, Ronald Dow and his parents, Merle and Emma. Oran won his title as National Champion Combination Horse over Labor Day Weekend this year in Oklahoma City. The Dows believe most people know the way from Caribou to their farm.

Free potatoes — Rilda Anderson and other family and friends of Ronnie Moir worked the phones Saturday morning to find people interested in picking free potatoes from the Moir Farms fields. The russets were in excellent condition for the most part but could not be put into storage so Moir was digging them for anyone who wanted to pick them. He dug 28 acres and there were up to 100 people at the fields off and on all day Saturday. The generosity of the Moirs, turning their loss into other peoples gain was certainly appreciated.

Meeting to welcome visitor from Sweden — A public meeting Tuesday, oct. 25 will welcome to New Sweden Olaf Isaaksson of Sweden, executive director of the Jubilee Committee to Commemorate the 150th anniversary of the mass immigration of Swedes to America. The meeting is scheduled at 7 pm at the New Sweden School. Richard Hede, a member of Maine’s Swedish Colony Inc., said Isaaksson was appointed to this position by the King of Sweden. Hede said Iaaksson will describe the planned celebration for 1996, and hopes to meet as many Swedes as possible during his visit to the community.

At the Houlton Humane Society, we take adopting the cats and dogs in our charge very seriously.
Campaign Corner END_OF_DOCUMENT_TOKEN_TO_BE_REPLACED