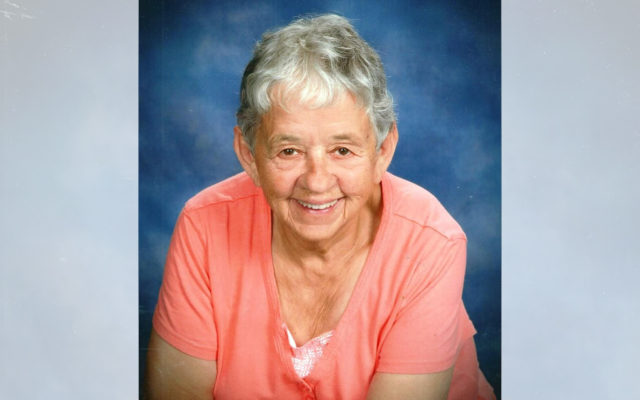 Jessica Potila • October 31, 2019
Family and faith have always been the guiding forces in Monica Jandreau’s life.

ST. FRANCIS, Maine — Family and faith have always been the guiding forces in Monica Jandreau’s life.

Born and raised in St. Francis, Jandreau, 85 is the mother of two daughters and four sons with her late husband, Warren Jandreau.

Times were not always easy financially for the Jandreaus, but their children wouldn’t have known it.

“At Christmas she would make sure we all had gifts under the tree. She would make clothes for our dolls, for my sister and I,” said Monica’s daughter, Cindy Jandreau.

One Christmas Monica acquired a broken doll house from a friend and repurposed it for her own child.

“She brought it home and fixed it,” Cindy Jandreau said. “Christmas morning, it was like gold to me. I did not learn until much later in life that it was not new.”

Along with raising her large family and volunteering for her community, Monica also worked several jobs over the years, including as a teacher’s aide, helping to teach English to elementary school students.

Monica also helped her husband run a laundromat, arcade and snack shop in St. Francis in the 1980s.

Family meals have long played an important role in the Jandreau family, with Monica doing the cooking.

“We always had a big hot meal for supper,” Cindy Jandreau said. “She would make homemade chocolate pudding and biscuits for supper on Sunday nights — what a treat.”

Monica shared her cooking skills with members of her community as chairman of her Catholic church’s annual harvest supper for 40 years, before retiring from the volunteer position this year.

“That was such a big part of my life. We always went to church. We were raised in that church,” Monica said. “It was something I wish I never would have had to give up; I loved it. I also do meals after funerals. I’ve done that for 40 years too. A big part of my life was working for the church, but we had help.”

Although she has retired from harvest supper duties, Monica still shares her culinary skills with her community.

“I like to bake bread, cookies, and doughnuts and bring them to some shut-ins here in town, and they really like that,” she said. “Once in a while I make a batch and go around. I like doing that; I’ve been doing that for quite a while.”

Home-cooked meals remain a vital part of the Jandreau household as well.

“Sundays are the big day for us. On Sundays there is never less than 12 or as many as 14 at the table,” Monica said.

“Every Sunday my kids come to eat and I have a sister that’s not well. I have her over and I have my brother, who is 81, but they come to eat, so I feel that’s the time when all the family gets together and we all see each other and sit and talk and eat,” she said.

“Some people think it’s too much for my kids to come every Sunday,” Monica added. “I say, these are my kids and they’re all busy. If we can still see each other on Sunday, that’s beautiful. You don’t see that much anymore, family getting together. In the old days you used to do that, but now it’s not really so often.”

In her free time, Monica enjoys creating homemade keepsakes for her family.

“I’m a real stay at home, but I like sewing and I like making quilts. I have a quilt made for each grandchild; when they get married they get the quilt, all hand made, all hand-quilted, you know,” she said. “It’s been a nice life. I enjoyed it and have no regrets.”

Just when we thought we were out of the woods with kitten season, it has hit full force.  The past few days have been difficult answering the phone and hearing the stories of why people have litters of kittens they need to surrender.
Campaign Corner END_OF_DOCUMENT_TOKEN_TO_BE_REPLACED