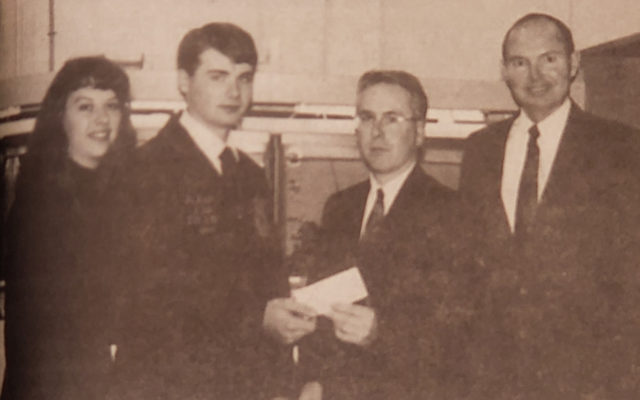 Compiled by Yvonne Tardie, Special to The County • November 4, 2019
Harvey Carter, son of Charles Carter, who graduated from high school in June 1917, was in the U. S. Navy all summer and was stationed at Thatcher’s Island, Rockport, Mass. Young carter applied for a radio course at Harvard.

Carter graduated — Harvey Carter, son of Charles Carter, who graduated from high school in June 1917, was in the U. S. Navy all summer and was stationed at Thatcher’s Island, Rockport, Mass. Young carter applied for a radio course at Harvard.

Brooker named NC  club head — The heaviest vote in the history of the Presque Isle Army Airfield NCO elections was cast when M/Sgt. Clifton Booker of Squadron “F” won the presidential seat for a six month period. He replaced M/Sgt. Herbert Stanley, who, during his term in office, had been instrumental in the many club improvements. M/Sgt. Booker tabulated 75 of the 236 votes cast on the initial ballot, while T/Sgt. Lloyd Jones placed second with 60 votes. VFW Post purchased State Street Building for new headquarters site — The property on the West side of the Presque Isle Stream, opposite the N. W. Downing and Son Co. had been acquired by the local “Gold Stripe Veterans Organization” to be used by them and their Ladies Auxiliary as Post Headquarters. It was planned that the upper floor be remodeled for use of the membership, while the street floor to be operated as a Servicemen’s Club and Canteen.

Huge chain store opened — Ribbon-cutting ceremonies were scheduled to officially open one of Maine’s largest chains of discount department stores, the Mammoth Mart, located just north of the city on Route 1. Local dignitaries, as well as executives of the chain, joined in the opening, the eighth such store situated in Maine. Mammoth Mart, with stores ranging from the Presque Isle unit to three in North Carolina, was listed on the American Stock Exchange.

Ford dealership took new name — A new face appeared on the Presque Isle business scene Nov. 1, when Bob Whited, owner of the Bangor-based Whited Ford Truck Center, took over the local Ford dealership, previously owned by Tom Gagnon. The former Slipp Ford-Mazda dealership on the corner of South Main Street became known as Whited Ford-Mazda and continued to provide the same high quality vehicles Aroostook County residents have come to expect, while at the same time increasing the number of services available. Other new services residents were expected to see included the expansion of the used and program car line and the introduction of a new, large truck sales and service dealership, called Whited Ford Trucks, located at the former St. Johnsbury site on the Houlton Road.

Just when we thought we were out of the woods with kitten season, it has hit full force.  The past few days have been difficult answering the phone and hearing the stories of why people have litters of kittens they need to surrender.
Campaign Corner END_OF_DOCUMENT_TOKEN_TO_BE_REPLACED