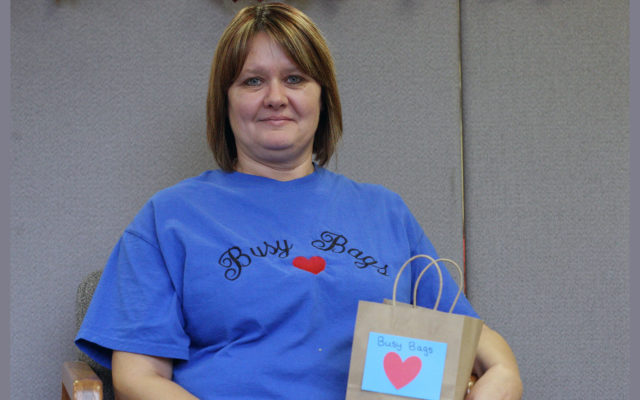 Such is the case of Oakfield resident Tracy Tarr and her daughter Kalie Bouvier of Littleton who have come up with a fun way to help ease the transition children experience when they are placed into foster care.

The mother-daughter duo has created “Busy Bags” — a small bag filled with items such as coloring books, stickers, crayons, modeling clay, a juice box, snacks and a toothbrush for children who are being placed into the foster care system by the Department of Health and Human Services.

“My daughter and I came up with the idea of having something small that a child may want to have during these difficult times,” Tarr said. “Some just want a snack. Others need something to distract them from whatever situation is happening.”

Tarr, who has been a foster parent for the past five years, has seen first hand how difficult and scary it can be for a child to be removed from home and thrust into the foster system. She has helped eight children during her time as a foster parent and two of those youths, who are actually relatives, she wound up adopting.

“We have two right now that are with us for a second time,” Tarr said. “They (DHHS) tell you not to get attached, but it just happens.”

The two foster children in her home for the second time are actually from the Lewiston area. Because of that connection, Busy Bags has expanded its efforts to include Bangor and Lewiston.

Since April, a grand total of 280 Busy Bags have been distributed throughout Aroostook County and into central and southern Maine. The Caribou DHHS office has received 75 bags, while Houlton’s office received 55; Lewiston and Bangor DHHS offices were given 50 each; and the Presque Isle and Houlton police stations both received 25 bags.

Initially, the mother and daughter paid for all of the supplies out of their own pockets. They have since started attending craft fairs, bringing their bags for people to see, in the hopes that people will donate to their efforts.

For $5, one bag can be filled with all of the items needed, Tarr said. Those that purchase a bag are able to personalize it with a note of support. The two women are able to achieve this effort by purchasing items in bulk online.

“We see the need for this as we have seen first hand how the kids that are taken into foster care need and want something to call their own,” Bouvier said. “This would be something to help them keep their mind off what is going on around them as it can be a very scary and difficult time.”

The duo has a lofty goal of providing a busy bag to every child that enters the DHHS system throughout the state.

For information, message Tarr through the Busy Bags Facebook page or by email at davidtarrtracytarr@yahoo.com.

Maine is more than eight months into Medicaid expansion under the federal Affordable Care Act and trends around who is enrolling and where they live are starting to emerge, bucking some expectations and pointing out access challenges.
Pets END_OF_DOCUMENT_TOKEN_TO_BE_REPLACED