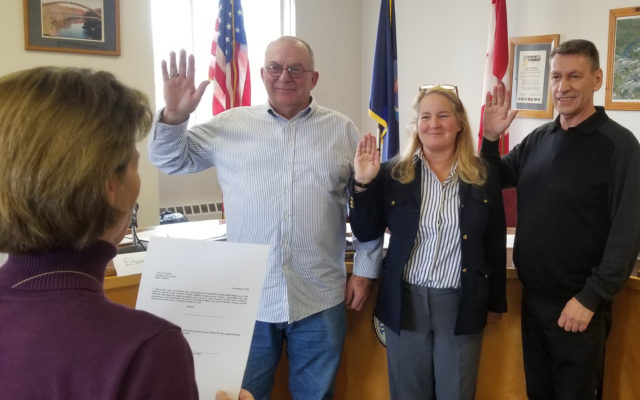 Winds of change for Houlton council

Joseph Cyr • November 6, 2019
The winds of change are blowing for the Houlton Town Council following Tuesday’s elections as two newcomers were voted into office.

HOULTON, Maine — The winds of change are blowing for the Houlton Town Council following Tuesday’s elections as two newcomers were voted into office.

Eileen McLaughlin and Jim Bell were both successful in their election bids for three-year seats on the council. McLaughlin was the top vote getter with 293 votes, while Bell was second with 261 votes.

Edward Lake was elected to a two-year term on the council with 493 votes.

For the RSU 29 school board, Ellen Askren and Fred Grant were re-elected to the group with 531 and 535 votes respectively. Albert Fitzpatrick and Josh McLaughlin were elected to three-year terms on the Houlton Water Company board of directors with 510 and 463 votes respectively, while Charles Taylor was third with 144 votes.

At an organizational meeting for the Houlton Town Council on Wednesday afternoon, the newly elected councilors were officially sworn into office. Councilor Jane Torres was also selected to serve as council chairman.

The board also heard a presentation from Dan Nelson, town attorney, on the duties and responsibilities of a councilor.

Nelson added the council was the “last word” on the purse strings, as the board is responsible for finalizing the town’s municipal budget.

He also cautioned them on things councilors should not be doing.

“What you are not is the human resource department,” he said. “The town charter has a clause that says you will not individually or as a body interfere with the administration of town business. You should not be directing, advising, or questioning town employees on what they do their jobs.”

Nelson also reminded the new councilors that they are to refrain from talking about town business any time three or more members of the council are together, as that can be construed as an illegal public meeting if the proper notifications were not given.

Houlton Town Manager Marian Anderson echoed those sentiments and encouraged each new councilor to be set up with a new town email for any correspondence so that their personal emails can remain personal.

“The most important thing to remember is anything that you say or do is now public and you are acting as a councilor whether you are at a council meeting or not,” Anderson said.

Only one member of Maine’s congressional delegation had come out in favor of impeaching President Donald Trump ahead of House Speaker Nancy Pelosi’s Tuesday announcement that the Democratic-led House of Representatives would begin an impeachment inquiry.
Pets END_OF_DOCUMENT_TOKEN_TO_BE_REPLACED

Recently we had a young man attend one of our board meetings to express an interest in helping the animals.
Campaign Corner END_OF_DOCUMENT_TOKEN_TO_BE_REPLACED