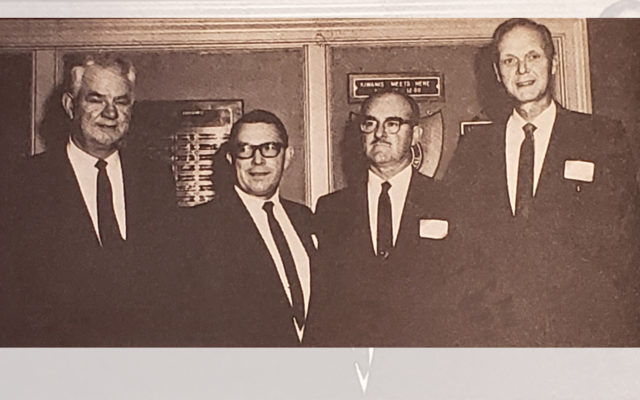 Yvonne Tardie • November 25, 2019
101 Years Ago - Nov. 28, 1918 Trip to the County -- J. B. Bucher, of Lititz, PA, was in town, this being the second trip he had made to Aroostook seeking seed potatoes for the farmers in Lancaster County, who specialized somewhat on potatoes.

Trip to the County — J. B. Bucher, of Lititz, PA, was in town, this being the second trip he had made to Aroostook seeking seed potatoes for the farmers in Lancaster County, who specialized somewhat on potatoes. Mr. Bucher said that the previous season, the potato crop in his section of the state was poor, but the tobacco crop more than made up for it.

In common with all the rest of the state, Lancaster was very hard hit by influenza. In Boyertown in the central part of the State, a casket factory whose normal stock of caskets was 10,000, was unable to supply the demand at the peak of the epidemic, having less than a dozen in stock. Lancaster, which was one of the richest counties in the country went over the top in the Fourth Liberty Loan campaign, subscribing $12,000,000 to the cause, thus proving its loyalty as well as its high prosperity.

Service sStripes for Red Cross Red Ladies — Col. Helmstra, Commanding Officer of the Station Hospital at the Presque Isle Army Air Field, awarded service stripes to American Red Cross Gray Ladies in a simple ceremony held at the Red Cross Hospital Recreation Building. These stripes were acknowledgement of the one and a half years of faithful service to the patients of the Station Hospital. The following Gray Ladies received the Red Stripe to be worn on the sleeve of their uniforms were: Mrs. Ray D. Hews, Mrs. Verne Beverly, Mrs. Milton Blackwell, Mrs. C. H. Burden, Mrs. Walter Christie, Mrs. Eugene Griffiths, Mrs. william Halloran, Mrs. R. Kent, Mrs. Karl Koch, Mrs. Percy Porter, Mrs. Fred Stevens, Mrs. Myron Williams and Mrs. Rand Junkins. This Volunteer Corps of Gray Ladies were trained by the Red Cross in May of 1943 and had since that time given daily service to the hospital patients. Their duties varied and were interesting under the leadership of Miss Nell Ennis, Red Cross Field Director.

Local students elected to State YMCA office — For the third consecutive year, the Presque Isle High School Hi-Y clubs have elected two of their members to offices of the State YMCA Older Boys’ Conference. The delegates to the conference, which was held on Nov. 21, 22 and 23 in Bath, selected Alan Harding, son of Mr. and Mrs. Floyd Harding, as vice-president, and Delbert Stevens, son of Mr. and Mrs. Albert Stevens, as assistant chaplain. The theme of the weekend conference was “Teen Hangups — It’s Your Responsibility.”

UMPI coach gained regional honor — Chris Smith, the coach of the men’s and women’s cross country teams for the past eight years at the University of Maine at Presque Isle, was named Coach of the Year for women’s cross country by colleagues in the Northeast Region of the NAIA. Smith’s women’s team won the Northeast Regional event in 1994 and were District V champions a year prior. Both teams ran in the national meet at Kenosha, Wisconsin.

Maine livestock team competed at national level — The Maine FFA livestock team met with the Career Development Event sponsor’s representative, Don Mauery, general manager of Purina Mills Inc., of St. Louis, Missouri. The team was one of 47 participating in the National FFA Livestock Career Development Event at the 67th National FFA Convention in Kansas City, MO. Team members were Hillary Bard, Gene Winslow, Norman Elliott and Russell Walsh. The team was accompanied by their advisor-coach, Anita Currier of Presque Isle. The event was sponsored by Purina Mills Inc., as a special project of the National FFA Foundation. The event was held at the American Royal Livestock and Horse Show in Kansas City, Missouri.

A few years back the Ark was gifted with something that we never dreamed possible. It is a gift that left us speechless and opened a whole new door for us.
Campaign Corner END_OF_DOCUMENT_TOKEN_TO_BE_REPLACED