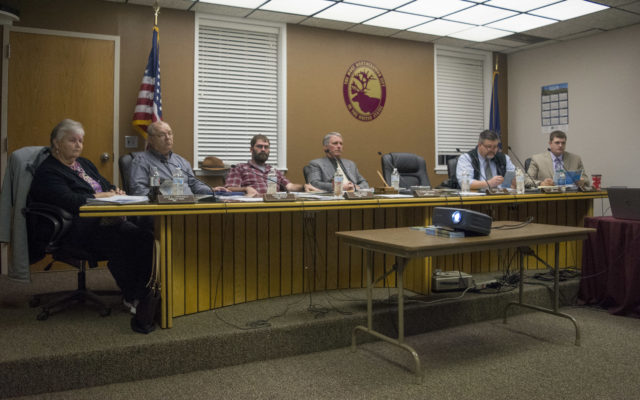 Chris Bouchard • November 27, 2019
Caribou City Council decided during a Nov. 25 meeting that each member would look at the draft 2020 expense budget and determine which lines should be amended.

CARIBOU, Maine — Caribou City Council decided during a Nov. 25 meeting that each member would look at the draft 2020 expense budget and determine which lines should be amended.

These items would then be brought up during their next regularly scheduled meeting on Dec. 9 for detailed discussion and voting.

In response to direction given by councilors during previous meetings, Caribou City Manager Dennis Marker presented councilors with a draft budget based on three major suggestions: to not use one-time funds; to ensure that capital expenses are the same or less than they were in 2019; and that the operational budget is the same or less than the total of 2019’s amended budget.

In the draft budget, capital expenses were reduced by $70,319 with several items being moved into future years, according to Marker.

Marker then explained some of the significant cuts that needed to be made in order to meet the council’s criteria, which included taking about $134,000 out of general government, $147,000 from the fire and ambulance department, $76,000 from public works, $70,000 from parks and recreation, and roughly $35,000 from the police department.

Several councilors offered suggestions after looking over the draft, and Councilor David Martin suggested not taking $4,600 out of the contributions line, as that money would go to the Aroostook Agency on Aging.

“The last time we took money out of that line, we got a lot of bad PR for being the only community in Aroostook County that did not support the Aroostook Agency on Aging,” he said. “It’s a contribution that gives us a lot in return. We’re an age-friendly community, and we keep backing off on programs that would help seniors.”

Mayor Mark Goughan agreed that it would be important to include this contribution in the budget, and Councilor Jody Smith asked if any cuts on the proposed budget would result in the elimination of any positions in the city, which Marker said would not be the case.

Goughan added that while his personal philosophy is that “government is not made to move slow,” the city’s current budget process is “quite quick” with only about one and a half months for officials to set the budget.

The mayor then suggested that, at the next council meeting, he would entertain any motions regarding amendments to the drafted 2020 budget “one at a time.”

Councilor Joan Theriault agreed with the mayor’s suggestion, but added that this may “change the dynamic” of Marker’s draft 2020 budget.

Theriault, however, said she felt that the method of having councilors each vote on amending items of interest is “the only way to do it.”

Marker said the draft he presented was not “an ultimatum,” but just an illustration based on previous suggestions, adding that “as council, you certainly have the prerogative” to amend the budget.

Goughan said that, through this method, several line items would be unchanged and council could then focus only on items of interest. He suggested that councilors go through the budget and send any suggestions to Marker, so they would be prepared to share their concerns during the next meeting.

Before moving on to the next agenda item, Marker said he would put these suggestions in writing so they can also be visible to the public prior to the meeting.

Just when we thought we were out of the woods with kitten season, it has hit full force.  The past few days have been difficult answering the phone and hearing the stories of why people have litters of kittens they need to surrender.
Campaign Corner END_OF_DOCUMENT_TOKEN_TO_BE_REPLACED