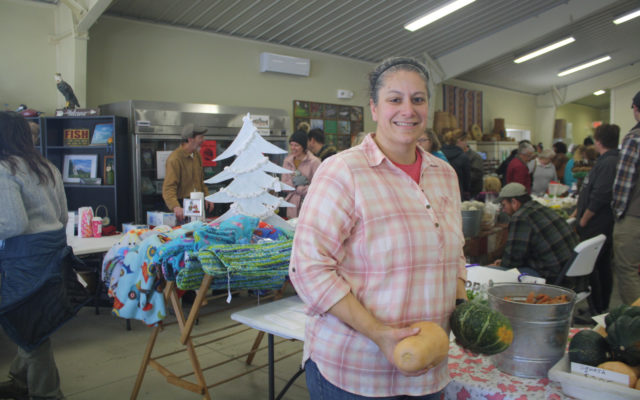 David Marino Jr. • November 27, 2019
Patrons from across The County and beyond packed into Micmac Farms on Saturday for the second annual Harvest Festival Market.

CARIBOU, Maine — Patrons from across The County and beyond packed into Micmac Farms on Saturday for the second annual Harvest Festival Market.

Dozens traveled table-to-table, taking note of what each seller had to offer. Attendees could buy squash, marshmallows, parsley, turkey, lamb, syrup, honey and pea shoots, along with a variety of teas, peppers and jams.

Many vendors had spent hours creating their products, largely from scratch.

Jan Grieco of Perham sold numerous flavors of organic tea using ingredients grown in The County. She said that tea-making is a longtime family tradition. One of the teas Grieco sold Saturday used a recipe developed by her Irish-born great-grandmother more than a century ago.

Members of Phi Theta Kappa from Northern Maine Community College sold a variety of homemade brownies. Walnut, plain, and even cream cheese brownies were available. All proceeds went to the Hope and Justice Project, which provides support to domestic violence victims within The County.

Many vendors advertised their items with themes of sustainability and healthy eating. The Chops Ahoy Farm, run by Deena Albert Park, featured “nitrate-free” bacon, available at $8.50 per pound. Only a few hours into the market, Park wiped the item off her whiteboard; it had quickly sold out.

“It’s always a hot seller,” said Deena Albert Park, who said she tries to sell at Micmac Farms events as often as possible. “A lot of people are eating healthier, and nitrates are just not good for you.”

The community aspect of the event was palpable. Attendees and sellers alike often stopped to greet familiar faces amongst the crowd. Few left empty-handed.

MaryAlice Mowry, who woke up early to drive about an hour and a half from Patten, said she especially enjoyed the Micmacs’ home-grown trout chowder.

“Great Food, the honoring of Native culture, and creating community,” Mowry said. “This regular market brings all kinds of people together that are learning to appreciate good food.”

“In a weird sense, this is their history too,” DeWitt said. “In order for us to successfully be here, we have to be here together.”

The Harvest Festival Market is part of a series of festival markets held at Micmac Farms every month. Micmac Farms said that vendors came from Presque Isle, Caribou, New Sweden and Fort Kent, among other locations. Vendors are allowed to sell in the facility free of charge.

Richard Shaw of Caribou said the trout keeps him coming back to Micmac Farms. He bought trout chowder, potato chips and salsa.

“I believe in helping the local people out,” Shaw said. “It’s a good way to shop.”

A few years back the Ark was gifted with something that we never dreamed possible. It is a gift that left us speechless and opened a whole new door for us.
Campaign Corner END_OF_DOCUMENT_TOKEN_TO_BE_REPLACED