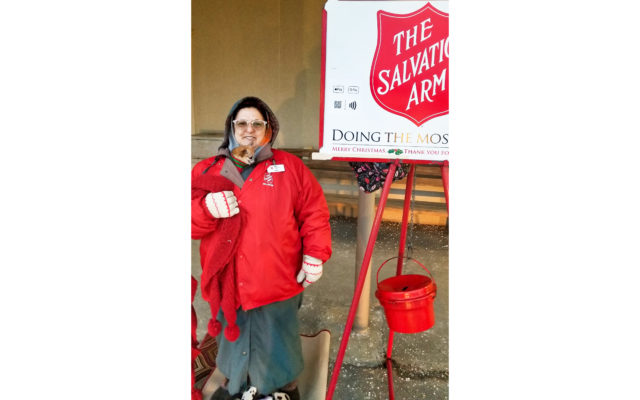 Joseph Cyr • November 27, 2019
For generations, the Salvation Army Corps has helped those in need during the holiday season with gifts, food and fuel assistance.

HOULTON, Maine — For generations, the Salvation Army Corps has helped those in need during the holiday season with gifts, food and fuel assistance.

Now through Christmas Eve, bell ringers will be out in force in Aroostook County collecting donations through the annual Red Kettle campaign. Donation buckets began popping up around a week before Thanksgiving and will continue to be staffed at local grocery and stores in the days leading up to Christmas.

According to Frank Nataluk, envoy/pastor for the Houlton Salvation Army, the Red Kettle campaign is the primary fundraiser for the Salvation Army. Last year, The County branch brought in a near-record $70,000 during the drive.

But this year expectations are somewhat tempered because Thanksgiving falls a week later than in previous years.

The Salvation Army also assists people by providing food, clothing and toys for youngsters at Christmas.

Allicia Torres Quirion is a service unit member for the Salvation Army in the southern portion of Aroostook and northern Penobscot counties. She represents 12 surrounding communities that are not directly associated with the Houlton Salvation Army. Any individuals ringing bells in the Patten, East Millinocket and Island Falls areas must be volunteers, willing to work two- to four-hour shifts.

“Our service unit is different from the corp,” Quirion said. “It is run strictly by one volunteer year round that involves no pay or mileage of any kind. This volunteer has no office or location. The [volunteers] meet clients at different locations. The unit also disperses coats from the ‘Coats for Kids’ campaign.”

She added the unit also has a limited number of vendors that accept vouchers to assist clients who have emergency needs.

“The Salvation Army also has endless opportunities for anyone wanting to or needing community service hours all year round, not just bell ringing,” she said. “Examples of the help provided this week was a mom who ran out of gas and needed to pick up her husband from work. She had just enough gas to get to her child’s doctor appointment. Another client had no gas to drive to Bangor daily for chemo treatments. And another just needed some kerosene so their pipes didn’t freeze.”

Quirion added many clients are first-timers asking for help and are often embarrassed and overwhelmed.

In addition to the red kettles, the Salvation Army also has several “Angel Trees” located at Walmart and Marden’s. An Angel Tree is filled with tags  listing items that a local family has requested. Tags typically read “8-year-old female, Barbie doll,” for example.

Just when we thought we were out of the woods with kitten season, it has hit full force.  The past few days have been difficult answering the phone and hearing the stories of why people have litters of kittens they need to surrender.
Campaign Corner END_OF_DOCUMENT_TOKEN_TO_BE_REPLACED